Tonight I tried out a fabulous new recipe I found from the Taste of Home website, called Thai Restaurant Chicken. First up, I sauteed a pound of chicken breast (kindly washed and cut up by Tom!) in dark sesame oil and seasoned with black pepper and red pepper flakes. Sesame oil smells so good! It’s what I imagine bathing in a huge tub full of roasted sesame seeds would smell like..? Anyways..

Once cooked through, I set the chicken aside and started stir frying the veggies in a bit more sesame oil, including broccoli, red bell pepper, a whole onion, half a pound of baby bellas (my fave!!!), and a couple cloves of GAH-lic, minced with my garlic press. Have I mentioned how much I love this gadget? I use it all the time. 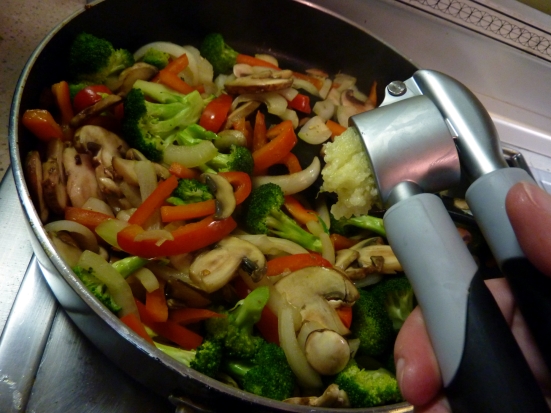 Once the veggies were crisp tender, I got a bit of help from Trader Joe’s in the rice department, and stuck this guy in the microwave for one minute. Because really, who has time to come home and wait 40 minutes for brown rice to cook? Not this nommer.

As if the sauteed garlic, onions, and baby bellas weren’t smelling food-gasmic enough, it was time to pour in the sauce I had pre-mixed before starting cooking, which consisted of:

After adding the sauce and the chicken back into the pan, I brought the mixture to a boil for a couple minutes until the sauce was thickened, and then served over the brown rice. I almost took a video clip of the peanutty sauce ferociously simmering away, because it looked so enticing, but I was having trouble with my camera. In fact, none of my pictures of the plated meal turned out! They are all stuck on my camera’s “clipboard,” and there’s no way to upload them, sadly. But luckily, this dish made enough for two dinners, so I should be able to capture some shots of the leftovers tomorrow, though the veggies may not be as vibrant the second time around. I just loved this dish, I’ll definitely make it again. And very low-cal: I measured out one serving size (1/2 cup rice and 1 cup stir fry) for around 360 calories is all! Very satisfying.