Ahh comfort food. As you may have seen in yesterday’s post, I recently bought a potato masher. Previously, the only potato mashing device I had was a ricer, which made for a rather labor-intensive (but oh-so smooth and creamy) batch of mashed potatoes. But sometimes you just want to get down to business and mash those bad boys up.

I placed four redskin potatoes, cut into quarters into a pot, along with two cloves of garlic, filled with water, brought the water to a boil, and let it simmer, covered, for 25 minutes. 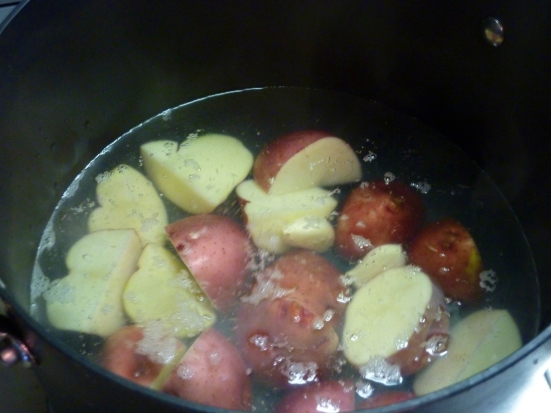 Meanwhile, while my potatoes were simmering and three seasoned chicken breast halves were baking in the oven, I sauteed half of a pound of baby bella shroomies in a skillet with EVOO until tender. These were also seasoned with a portion of the same seasoning mixture as the chicken, which consisted of 1/2 tsp each of:

After sauteeing the baby bellas, I added one minced clove of garlic, followed by a spoonful of flour. Next I slowly added in 1 1/4 cup of reduced-sodium chicken broth, and 1/4 cup fat-free half-and-half (substituted for heavy whipping cream, as in the original recipe). I brought this gravy mixture to a boil while stirring it (also ended up added extra cornstarch mixed with hot water for thickening power)

After the chicken breast halves were baked through (375 degrees for 25-30 minutes), I plopped them into into the mushroom gravy (along with the several spoonful of “juice” or drippings from the chicken, which added even more savory, rich flavor to the gravy).

While the chicken was bathing in the thick, creamy mushroom gravy, I went to town on the mashies. To the four drained redskin potatoes and two cloves of garlic, I added 1/4 cup of fat-free half and half (warmed), 1 T. butter, S & P, and a few shakes of grated parmesan cheese. I also went back and added a few extra splashes of milk, since I like super creamy mashed potatoes.

To plate it up, I put a bed of mashed redskins in the bottom of my bowl (my new ones, aren’t they lovely!?), topped them with a piece of chicken, and poured over the mushroom gravy. I took a bite and then declared to Tom that I need to open a restaurant. Holy deliciousness. Words cannot express. I’ll let this picture do the talking for me:

Note: These two recipes were adapted from recipes found at the Taste of Home website. Follow the links below for the original recipes:

8 thoughts on “Chicken and Mashed Redskins in Creamy Mushroom Sauce”