Tonight’s dinner involved this sizzling pan of bacon. Which means this meal has to be going somewhere good, right?

..And then I chopped up a little bit of everything in the fridge, including red onion, green pepper, tomato, green onion, shredded zuke, mushrooms, and shredded sharp cheddar. Can you guess what I made yet? What if I pointed the two bowls of whisked eggs? (Each bowl has 1 egg, 2 egg whites, a splash of milk, a dash of hot sauce, and lots of pepper). Omelets! 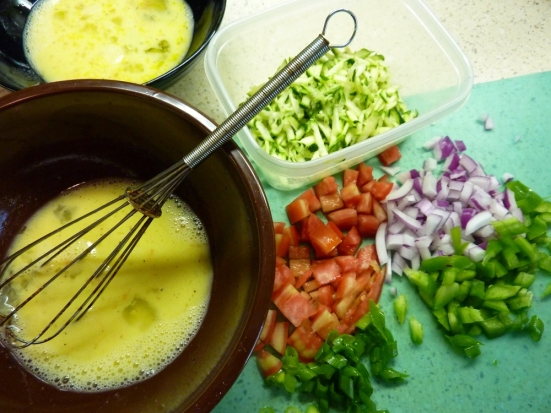 Though I have always been an avid omelet-lover, only in the past few months have I started making my own. It’s not as difficult as you may think.  I poured each bowl of egg mixture, as described above, into its own saute pan and heated over medium-high-ish heat. Once the edges start to cook, gently lift of the edges of the cooked egg (rubber spatula works best), and tilt the pan in such a way that the uncooked portion of the egg runs underneath.

Once your egg is nearly cooked through, load up one half with your filling. I clearly am a generous omelet-filler, hence the heaping pile of goodies below. You must be thinking: ‘Megan! That is a LOT of bacon for someone who is supposedly counting calories!’ Well my friend, I can’t deny it, I was rather generous on the bacon tonight. Each omelet has 4.5 cooked slice of bacon. According to the nutrition facts, that’s about 200 calories’ worth (80 per every two cooked slices apparently…that seems lower than I thought). Not terrible considering that the egg portion is primarily whites, with only one yolk mixed in (two whites + one whole egg = approx. 100 calories), and the remaining filling is a heaping pile of veggies. Got a little sharp cheddar on there too, but not too much. Cheese is mandatory in an omelet though, amirite? 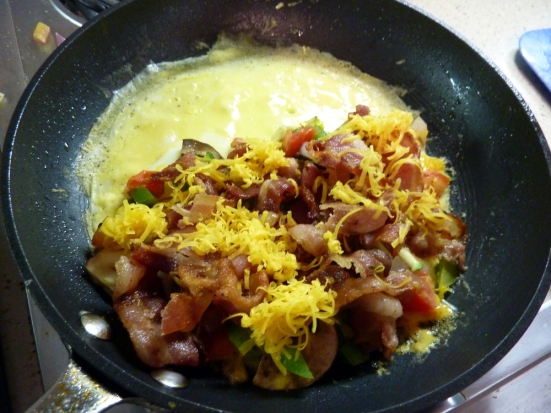 The next step is to fold over one half of the omelet so you end up with a shape like this. It looks good in the picture below, but once plated, this omelet was bursting at the seams with goodness.  Not that that is a bad thing, by any means!

Meanwhile, these babies, below, were also heating on the stove. I wish I could say I made these from scratch, but they were frozen. They are Alexia brand Chipotle Roasted Sweet Potatoes, with “black beans, sweet corn, red bell pepper, oninos, and a chipotle infused oil blend.” As they were heating, they smelled INTENSE and I was a little worried, but I worried in vain, as these were delicious! The flavor was on the bolder side, but in a good way! Just loved this mixture of sweet and savory veggies, beans, and seasonings. I’ll definitely make these again, with half the bag weighing in at 240 calories.

Plated and bursting omelet! Nomnom. And a side of chipotle sweet potato and black bean mixture. 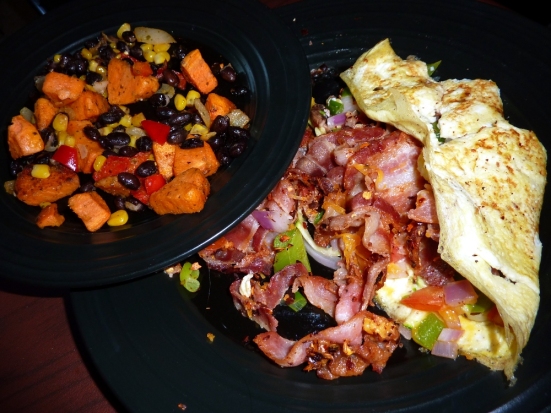