Barley? Tofu? Not typical ingredients in the meg.goes.nom.nom pantry. By no means. Tonight got pretty adventurous in the kitchen. I found a vegetarian recipe for “Toasted Barley, Green Bean, and Shiitake Salad with Tofu,” in the September 2010 issue of Cooking Light magazine (you can also view the recipe here). New Ingredient #1: Pearl Barley. 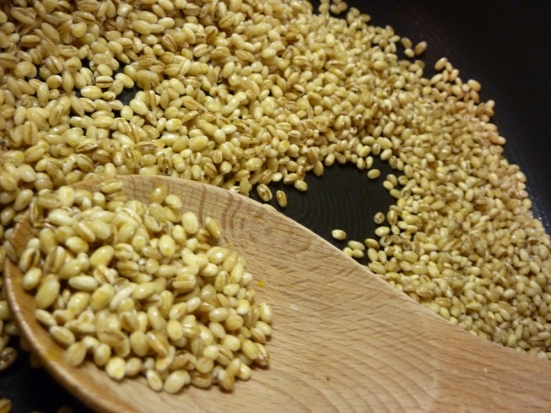 I found this organic Pearled Barley at Whole Foods, and toasted one cup of it in a couple teaspoonfuls of sesame oil over medium heat for three minutes, before adding 5 cups of water and simmering for 45 minutes. So what is one to do with 45 minutes to kill?…. 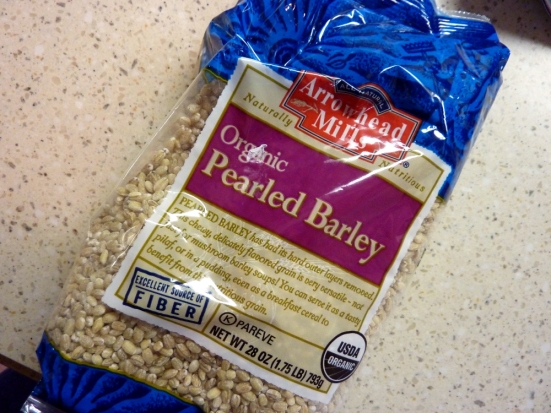 …Drain some tofu. This is the first time I’ve cooked with tofu, and it wasn’t until closely reading this recipe that I realized tofu  should be drained prior to cooking. The Cooking Light recipe suggested slicing the large chunk of extra-firm tofu into five slices, placing a thick layer of paper towels above and beneath the soy delight, and topping it with a heavy skillet for 45 minutes. I changed the paper towels around 3 times and they were sopping wet each time. Effective method for removing water… I actually used a glass casserole dish with a can of soup as a weight.

While the barley was simmering away happily on the stove, and the tofu was being pressed, I mixed together a marinade for the tofu. Marinade party members included:

After the tofu had been pressed between paper towels for 45 minutes to remove excess moisture, and to allow for increased marinade absorption, I tossed the tofu in the above described marinade and let it hang out in the fridge for about 10 minutes. Doesn’t look so scary, does it? I think it’s cute. 🙂

Next I spread out the tofu in a single layer on a foil-covered baking sheet, liberally sprayed with cooking spray, and baked at 375 F for 35 minutes, flipping once after the first 15 minutes or so (the tofu, not me). 😛

Next ingredient to tackle: ‘SHROOMIES! Certainly NOT a new ingredient in the meg.goes.nom.nom kitchen, but prepared in a new way this time. The recipe actually calls for shiitake mushrooms, but the store seemed to be out, so I opted for Baby Bellas, one of the true loves of my life. I brushed these off with a damp brush and removed the stems, leaving the caps only.

The caps were all lightly brushed with sesame oil – again, I love this ingredient; try cooking with it and the smell will get you hooked – and placed into a skillet over medium-high heat for around 5 minutes. Gorgeous!

Not going to lie, I pulled a “Rachael Ray” in the kitchen tonight. I was literally standing in my kitchen repeatedly shouting out, “gorgeous!” as I was chopping these suckas up. Having a heyday, you might say. I mean, there really aren’t any other words to describe these Bellas, other than gorgeous. ❤ 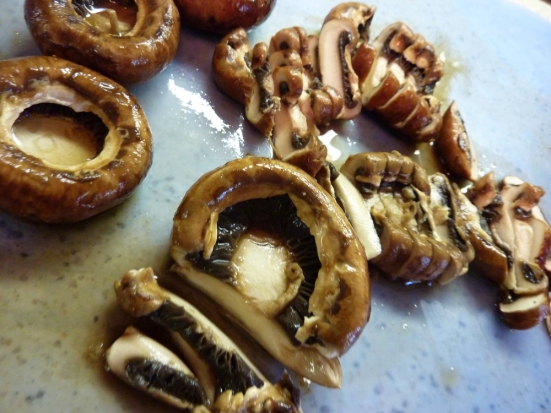 Finally, 45 minutes the barley was done! I drained it in a colander (was slightly worried it might be too small to be drained in my colander, but it puffed up quite nicely, and was able to be drained with minimal barley loss), and let it cool while I prepared the rest of the dish, giving it a stir every few minutes or so.

Tofu is some high maintenance stuff, kids! Between the 45 minutes of draining/pressing, 25 minutes of marinade time (which I reduced to around 10), and 35 minutes in the oven, I was ready to nom the heck out of this stuff. 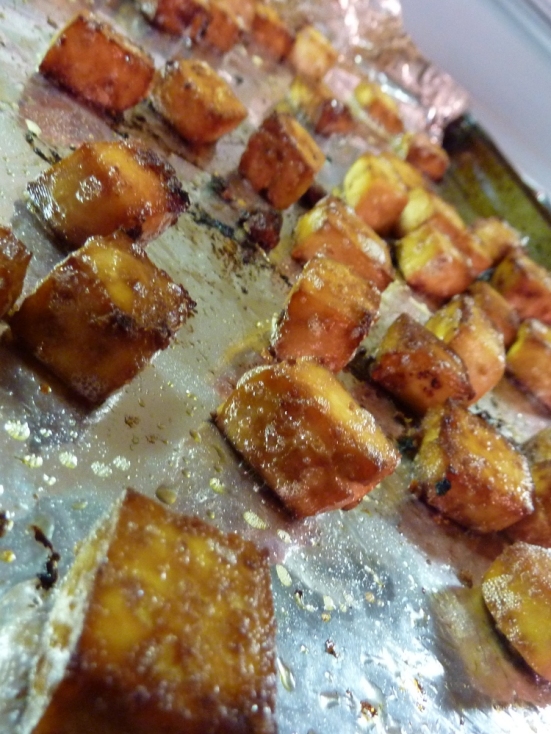 Had a minor freakout when I thought I was out of green onions (how can two people eat FOUR bunches of green onions in three days?!), but then I realized I had already chopped them up this past weekend, so there was a nice container of pre-chopped green onions just chillin’ out in the fridge. Score. I also cooked around 1 lb. of green beans in boiling water for around 4 minutes, followed by a prompt ice water bath, to stop the cooking process.

At this point, all that was really left to do was mix everything up, drizzle a dressing over everything, and toss to coat. The dressing for the barley mixture contained:

Into my serving bowl, I poured the cooked barley, boiled green beans, green onion, sliced sauteed baby bella ‘shrooms, baked tofu, drizzled the dressing above over everything, and gave it a toss.

This definitely ranks pretty high up there with some of the more ambitious dishes I’ve prepared, and I am SO happy to say it was worth the effort! This was absolutely delicious! Packed with flavor, as every layer of the dish was seasoned, and combined to create a very flavorful dish! The mushrooms were tender and earthy, the green beans were so fresh and still had a bit of a crispy bite to them, the barley had a nice nutty chewy texture, the tofu baked wonderfully – I could go on and on. I really loved this. Even meating-loving Tom, cleaned his plate and rated this a 9/10. I’d agree with that rating. I really like this picture too.

♪♫ Currently listening to: Where Did You Sleep Last Night – Nirvana.