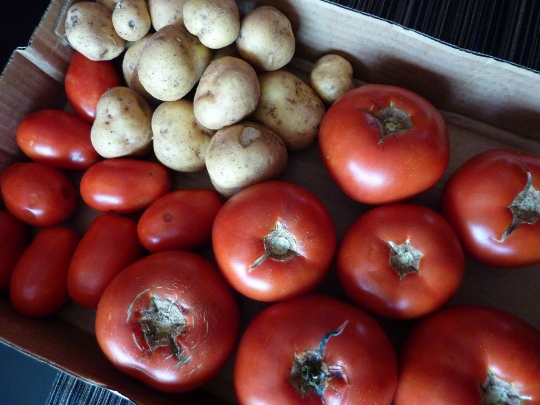 First up – the Yukon Golds. These were some cute little guys, so I cut the bigger ones in half and left the smaller ones whole, to prep for an oven roasting. Love that enticing gold flesh inside.

Next I tossed the potatoes in a few drizzles of EVOO, and sprinkled with chopped fresh thyme, minced garlic, salt and pepper, and also a few shakes of dried marjoram and rosemary. 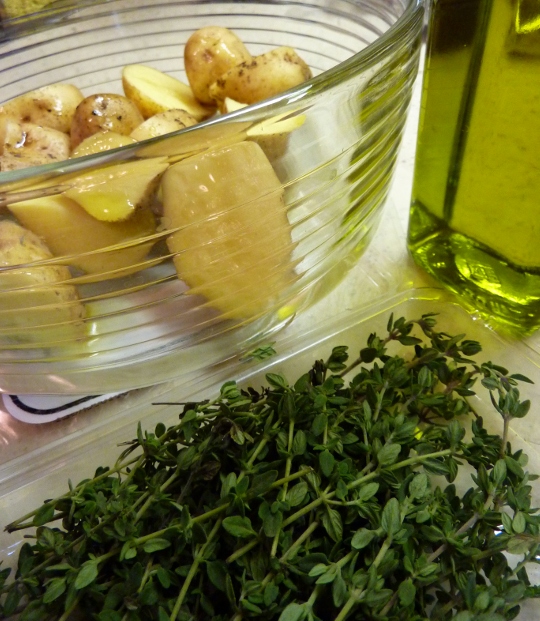 Lined ’em up on a cooking spray-coated baking sheet and baked at 450 F for about 30 minutes. Here they are right before being tossed in the oven:

Next up – the tomatoes! They are crazy-red inside – the ones from the grocery store sure don’t look like this! Gotta love home-grown tomatoes. I like to remove the seeds and mush from mine, leaving only the flesh.

I think I’m learning to like way more vegetables than I ever used to, by making just a few slight changes. I used to HATE celery, but it was mostly because I didn’t like tough, stringiness in the stalks. I found that if I peel the outside of the stalks with a veggie peeler to remove that stringiness, I do like celery! Likewise with tomatoes – I used to hate tomatoes, but mostly because I hated the mushy, gunky, seedy texture. I found that if I remove the seeds (simple to do with your forefinger and thumb), they are indeed quite tasty. And this is the best time of the year to take advantage of their bounty! (However, I don’t really have any good explanation as to how I went from despising onion until my early 20s to currently worshipping it, though. That one’s a toughy. I get panicky when I get down to one onion in the fridge. You know – I just worry. I prefer to have at least 3 or 4 on hand at all times.)

So what did I have in mind for the tomatoes tonight? Well, last night we had caprese salad, so tonight was BLT night! 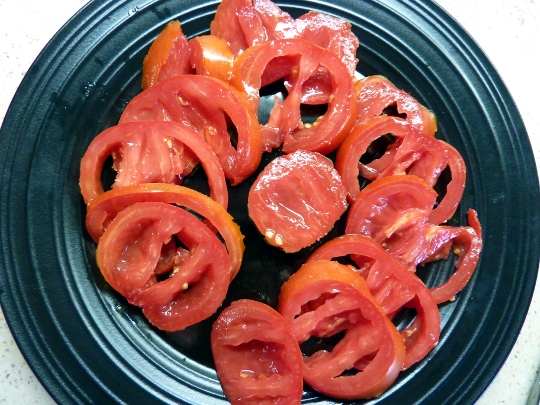 So naturally, the next BLT ingredient to prepare was the B – BACON! I’ve been cooking with bacon a lot lately. I made 14 slices of center cut bacon for the two of us. 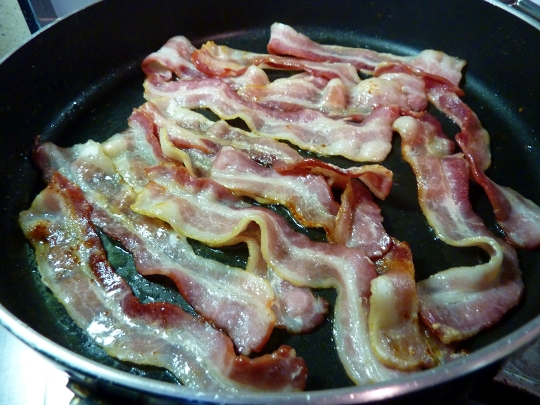 I sliced up a loaf of sourdough bakery bread next…

Lightly buttered up the pieces and browned them up, grilled-cheese style, sans cheese.

After the bread was browned, I added a little miracle whip, some romaine lettuce, tomato slices and the bacon – voila! The potatoes were also fantastic. I love this meal. I love that just a few simple ingredients prepared right can make for such a delicious meal.

Tomorrow night I am planning on cooking something pretty exciting/crazy, so come back and check it out! 🙂

♪♫ Currently Listening to: Pushing Me Away – Linkin Park.