Greetings! This entry will again about Indian cuisine! If you’ve had a chance to read my last post, you may have seen that I recently tried my hand at cooking some Indian-inspired cuisine myself. Since it was so tasty, last night Tom and I tried out an Indian restaurant downtown Ann Arbor, Shalimar, for the first time. We got great seats, one of only two tables in the front window on Main Street – perfect for people watching. Probably since we are such an attractive couple, they knew we would lure people into the restaurant. 😉 (Tom’s joke, not mine).

Not really knowing where to begin, or what single dish to commit to, we ordered the Tandoori Mixed Grill for 2, which included, an "assortment of Chicken, Lamb, Fish and Shrimp marinated and cooked in our Tandoor. Served with daal soup or salad, naan, basmati rice and vegetable of the day." Tom and I both ordered the daal soup, which was a bright yellow lentil soup. Pretty tasty, nice color and texture.

Next we received our giant platter of assorted tandoori meats. I actually would have enjoyed an explanation of the dish from our server, because I honestly didn’t know what anything on the plate was, so just blindly tried everything, sometimes not even sure what meat it was! Tom and I just called them by their color mostly. So clockwise, starting at 12:00 are: 1) the yellow kind – chicken, my least favorite – this was actually bad to me; 2) the brown one – poultry (chicken..?) on the bone, very tasty indeed!; 3) the green one – no idea what kind of meat! looked like dark meat chicken – was good; 4) sausage-y dark brown one – definitely my favorite!!! pretty sure this was minced lamb – could eat a whole plate of this, 5) orange kind – i don’t even remember this!; 6) somewhere on the plate were also JUMBO shrimp and they were divine. 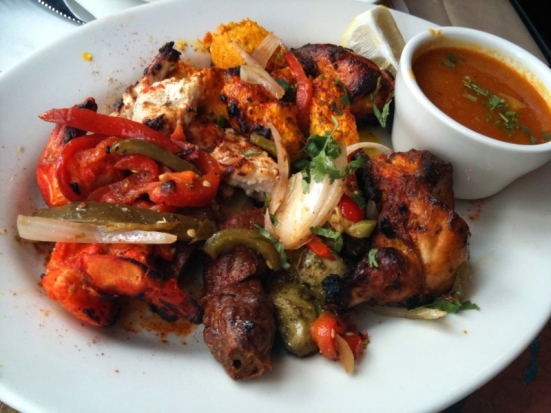 We also got a basket of naan, oven-baked flatbread. Wasn’t exactly certain how to incorporate the naan into my dish either, but I just went with it, and did what made sense – dipped it in leftover bits of sauce on my plate. A giant bowl of basmati rice was also included, over which I plated the above meats and sauce.

For dessert, we made happily made it to Cupcake Station before they sold out for the evening. We ordered 4 and ate each ate 1 last night, bringing 2 home. Tom ate the German Chocolate one, while I had one of my favorites, Vanilla Latte – moist vanilla cupcake with visible vanilla bean seeds, with a vanilla latte buttercream frosting. We both ordered a Chocolate Moose (yup, moose, not mousse) to bring home. HEAVEN.

Tonight we are going to the LADY GAGA CONCERT!! So excited. I purchased my tickets months ago and can’t believe the day is now here!