Yesterday, Saturday, was a rather action-packed day. The first event of the day was attending the Michigan v. Massachusetts game at the big house. Sorry in advance for the not-so-hot iPhone pics! 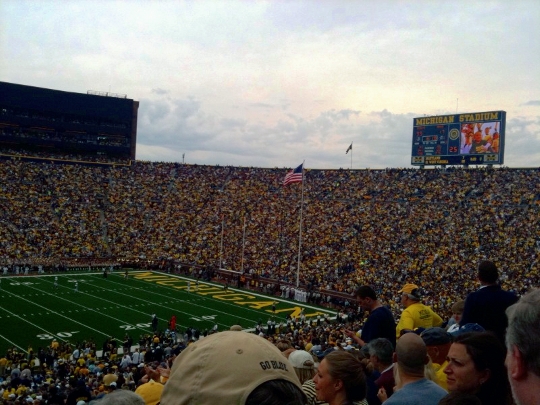 Seats weren’t bad (though there’s really not a bad seat in the place) – right around the 50 yard line. Weather was gloomy, but the rain held off during the game, minus a few tiny sprinkles toward the end. We won (HAIL!), but it was a little too close for comfort. ♪♫ It’s great to be a Michigan Wolverine. 🙂 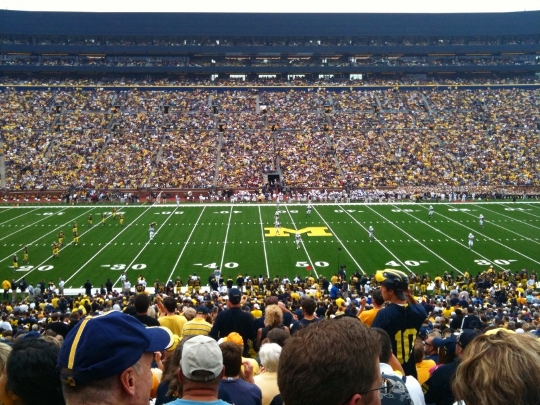 My first nom of the day was a salty soft pretzel with cheese at the game. It’s been ages since I’ve had one of these. I used to work in a water park concession stand, and would have to bake pretzels everyday, and I still have a scar on my arm from a particularly bad pretzel pan burn. Ouchie! The summer I worked there I used to nom these bad boys on a daily basis (50% off for employees). So not healthy (all that salt), but oh so good.

Something about going to football games always tires me out immensely and makes me ravenously hungry. I wanted food and lots of it for dinner – was craving a burger, so we went to Max & Erma’s for their 3-course combo. First up, a bowl of Tortilla Soup. Ridiculously good. I tried a copycat recipe of this once (before the blog began!), and it wasn’t bad, but it was killed by the cilantro I put on top, as called for in the recipe. I think that was the first time I realized how much I dislike cilantro (though tolerate it when it is discreetly mixed into things like burritos or guac). But in any case, who knows if there is any cilantro in the traditional – if so, I can’t detect it, because this stuff is delicious. Enjoyed with a diet IBC root beer.

The main course – burger with pepper jack cheese and fries. I LOVE Max & Erma’s fries! They are so salty and PEPPERY! I also loaded up my burger with ketchup and Dijon mustard. Which I find slightly hilarious – a few years ago I would only eat a plain burger with cheese and pickles – NOTHING else. Oh, how my tastes have changed so dramatically! 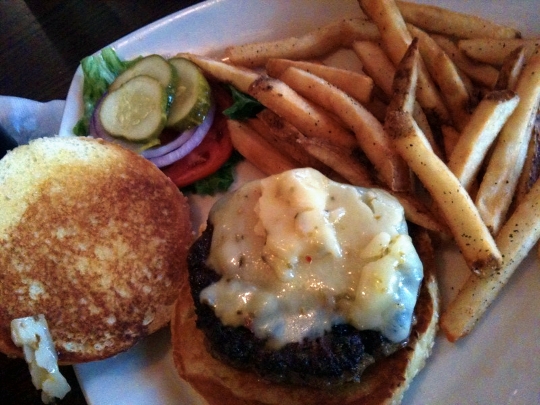 Later that night, we got gussied up for a night out, which began with cocktails at Red Hawk. I first ordered a Michigan Cherry cocktail, which, I didn’t really realize until after ordering, upon closer inspection of the menu, was basically straight liquor. Also with served with “brandied cherries.” Yikes. The real eye-catcher for this cocktail was the “Black Star Farms Spirit of Cherry Brandy,” since I was visited Black Star Farms in Suttons Bay and in the Old Mission Peninsula this summer (read about it here!). This was pretty good, but I’m going to admit something kind of embarrassing right now, as long as you promise not to judge me, little nommers:

I added Splenda to my cocktail……. It’s true. I’m not really the kind of hardcore girl who drinks straight liquor, so I had to sweeten this bia up a bit. Toby Keith was not singing about me in the song Whiskey Girl, that’s for sure (“She ain’t into wine and roses; Beer just makes her turn up her nose; And, she can’t stand the thought of sippin’ champagne; No Cuervo Gold Margaritas; Just ain’t enough good burn in tequila;; She needs somethin’ with a little more edge and a little more pain; She’s my little whiskey girl.”) Bring on the Splenda, kids.

[Edited in 2013: Another testament to the fact that my tastes have changed dramatically! Now I love bourbon and whiskey and even go to whiskey tastings! What! Also I gave up Splenda {in anything} completely about two years ago.] 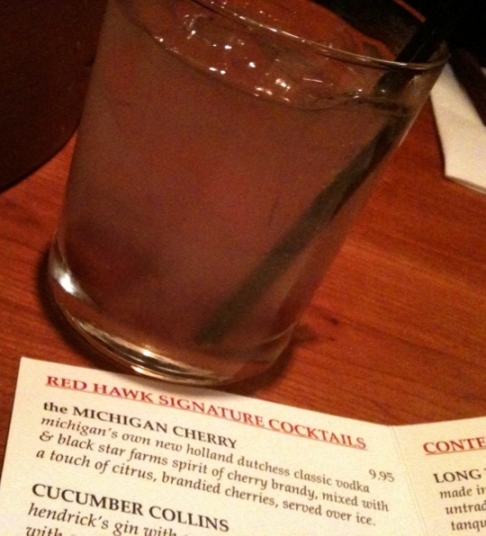 After a few drinks, we headed to the Blind Pig for a show and dancing. Definitely danced to a Thriller remix and it was amazing. Holla!

3 thoughts on “Football game, Burgers, and a Cherry Cocktail (which may or may not have had Spenda in it)”