Happy Tuesday! Almost halfway through the work week. (Struggling for optimism!). Tonight I started dinner by roasting two medium sweet potatoes. Nothing new and exciting from MegGoesNomNom, right? Well, I did change my method in three ways, and was happy with the results. 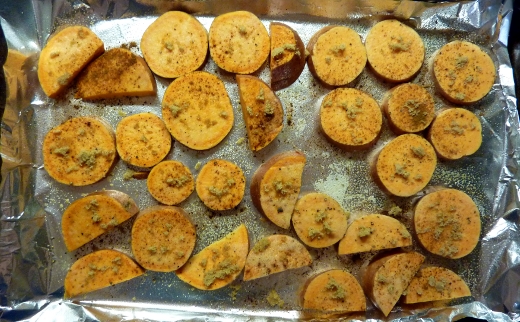 The sweet potatoes were sliced approximately 1/4″ thick, sprayed with cooking spray, sprinkled with salt, pepper, cinnamon, and brown sugar, and baked at 400 F for 30 minutes, turning halfway through.

For the main dish, I prepared one of my new favorite recipes – Cran-Turkey Burgers. (Click here to see the recipe source [Taste of Home magazine], and click here to see what it looked like last time I made them). I cut down the recipe, and used only 2/3 of everything, to accommodate using 1 lb. of ground turkey). To the ground turkey, I simply added dry stuffing mix, whole cranberry sauce, and dried thyme, shaped the meat into four patties, and cooked in a skillet over medium-ish heat for about 8-9 minutes per side. They didn’t stay together perfectly, but that is okay!

To serve, the burgers are topped with lettuce, a slice of jellied cranberry sauce, and turkey gravy, and placed on toasted whole wheat buns. Last time I used a dry gravy mix from an envelope, and this time I paid the extra $0.30 and splurged on the jar, which was so totally worth it! Yummy! And even if you eat a whole 1/4 cup of the gravy, it only adds 25 calories. Isn’t that surprising?? Also, I concluded the bun isn’t necessary. Next time I think I will go bun-less and save 140 calories. These are so easy, I love them. It also was a plus that I had leftover cranberries and buns in the freezer from last time, and also leftover stuffing mix, so they were inexpensive to prepare. Nom Nom. 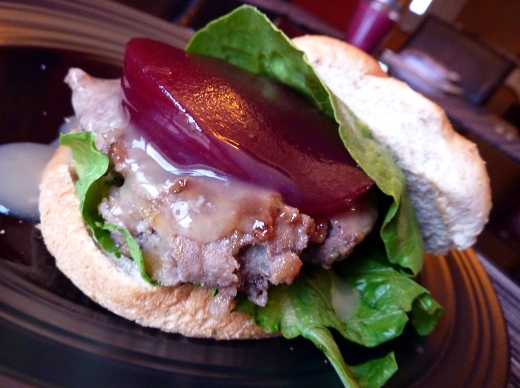 Can we talk about ground turkey for a minute? As discussed in a previous post, my first encounter, or rather, my first time cooking with ground turkey was a fail (pre-seasoned, possibly spoiled, used in Hamburger Helper – yuck!), and I steered clear of the stuff for a couple of years after that. During my fourth-year in college, Tom worked at a grocery store for part of that year, and encountered a huge deal on ground turkey – and we ended up with around ten 1-lb. tubes of the stuff (un-seasoned, this time!). Let’s just say my senior year of college was largely fueled by turkey burgers on the George Foreman!

At the time, I had this idea in my mind that ground turkey was so much healthier and lower fat than ground beef. That is pretty much the reputation it carries, wouldn’t you agree? Well, after becoming a calorie-counter, I’ve discovered that is not necessarily the truth. It all depends on the choices one makes. (The below information was gathered from livestrong.com and is based on a 4 oz. serving size ).

Conclusions: In one respect, turkey wins in that it has less saturated fat than its beef counterpart at the same lean meat/fat ratio. However, contrary to that note, ground turkey actually has slightly more cholesterol content than ground beef. Subbing out turkey for beef isn’t necessarily a winning idea if you are trying to reduce your calorie and fat intake, as you can see above, the fat/calrorie contents are quite similar for turkey and beef at each level. If you are using an extra lean ground turkey (99/1) in place of a ground round beef (85/15), then absolutely, that would be a healthier choice. (Extra lean ground turkey also tastes BLEH in my opinion!). But subbing out 85/15 turkey for 85/15 beef isn’t necessarily much of a better choice… (Depends what factors are important to you – saturated fat, calories, nutrients..).

Basically, these are just some things to think about – clearly I’m not a nutritionist, and there are other factors to take into account, such as nutrient levels in each type of protein (beef is a much better source of iron than turkey!) – I just wanted to point out that ground turkey isn’t necessarily the super-health food that some make it out to be! My two cents for the day. 🙂

With all THAT said, my turkey burger (using 93/7 ground turkey!) was DELICIOUS tonight – with all the delicious thyme and stuffing mix seasonings complementing the turkey so well – as were the oven-roasted sweet potatoes! Turkey + cranberries = luv.

WHY do I hear a train blowing its horn right now!? I do NOT live by train tracks! What is going on!?!?

Question of the day: So who do you think wins? Ground turkey? Ground beef? Neither? Other?

The Godfather Sub from @dibellassubs. All about that everything bread. 😍
Breakfast carryout from Mark’s Midtown Coney Island was delicious today!
We had a blast decorating Easter cookies with this adorable kit I ordered using curbside pickup from @bennysbakerysaline! Such a cute idea! 🐣🐰🌷 (My baking sheets are a bit less than beautiful however!)
Living that takeout lifestyle with two California Burritos and a kids’ meal. #stayhome #carryout #takeout #dinner #mexicanfood #burritos #margaritas #salinemichigan #annarbor