Tonight I recreated a dish that I recently fell in love with at Seva, local vegetarian restaurant – Pumpkin Manicotti.  Remember when I achieved nirvana? Well, I hoped to attempt the create the experience again today. Cooking this meal involved very little donning stilettos and minimal apparel! Sneak peek: 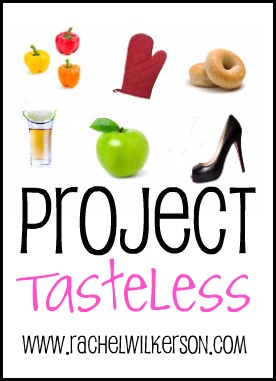 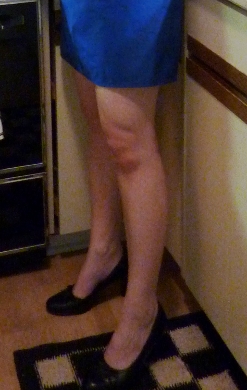 Yes indeed, nommers; things got a little saucy (and I’m not just talking bechamel sauce!) in the MegGoesNomNom kitchen this evening, as part of my entry into Rachel Wilkerson’s Project Tasteless Challenge. Rachel’s is a fave among my daily blog reads, and I was psyched when this competition was announced! I recently became a Foodbuzz Featured Publisher, but it was finalized a few days after the Foodbuzz “Project Food Blog” competition began, and so, I wasn’t able to enter into the competition to become the next Project Foodbuzz Star. So Project Tasteless is my first time entering in any type of cooking/food blogging competition. And I’m bringing my A-Game, kids! 😉

Back to the noms – I didn’t have a recipe to follow for my Pumpkin Manicotti, however, the dish and my methods were inspired by: Cheese and Pumpkin Cannelloni Recipe, Pumpkin & Spinach Manicotti recipe, and the Seva menu description. To begin, I melted 4 T. butter (real please, for the love of noms!), and sautéed 3/4 cup onion over medium heat until soft. I then added in 1 cup of canned pumpkin. 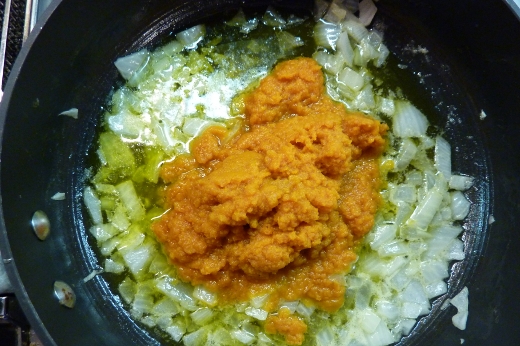 Next it was time to do a little choppin’! What’s that, you ask? Where are my clothes!? Well. For Project Tasteless, Challenge #1 is entitled, “The Naked Chef.” That’s right, it was time to go free and throw on my oh-so-sexy apron that I got when I was around 12 or so! Don’t worry though, I still had on my stilettos at this point – had to keep it classy, of course. Here I am chopping up some spinach. Serious biznass. Clearly I am lovin’ it. (Picture courtesy of my very lucky hubby. 😉 ).

It was also necessary to bust out some mad beatz – like say, Ke$ha’s song, Take It Off?! So appropriate. “There’s a place downtown…”

Next we had a bit of a Cheese Situation. A Cheese Party, you might even say. Guests in attendance included: 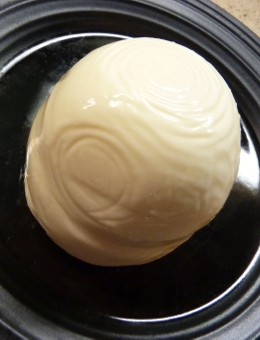 Things were getting seriously SPICY! I added dried thyme, rubbed sage, and ground nutmeg, to the pumpkin/onion/butter mixture.

Once I combined the pumpkin, the cheese, the spinach, and the spices, I sampled the mixture several times, and adjusted the seasoning levels, and added in salt and pepper. I could hardly contain myself at this point. It was tasting darn good, remarkably close to the dish I had at Seva last week.

Meanwhile, things were getting hot and steamy on the other side of the kitchen, as my manicotti noodles boiled away. 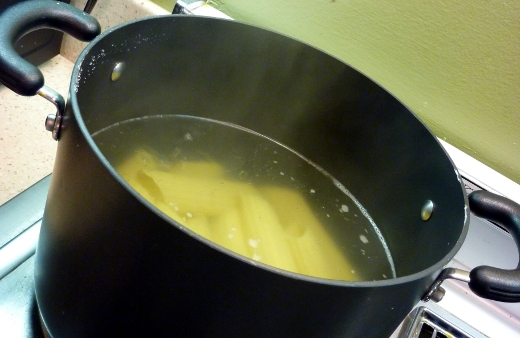 Roux-time! Next it was time to create a creamy bechamel sauce – basically a staple white sauce in the culinary world, which can be used as a base for other sauces, such as cheese sauce or mushroom and herb sauce. A roux (pronounced “roo,” like the character in Winnie the Pooh”), is a cooked mixture of melted butter and flour that is used as a thicken agent in sauces and soups. To create my bechamel sauce, I melted 5 T. butter in a skillet, and added 4 T. flour over medium heat. I stirred the mixture nearly constantly for about 7 minutes, until it achieve a light brown peanut-buttery hue. Browning the roux as such adds a nutty flavor to sauces, but be careful – it can go from nutty to burnt quickly! Next I added 4 cups of milk (I actually used 3.5 cups of 1/2% milk, plus 0.5 cups fat-free half and half) to the roux, slowly, incorporating one cup of milk at a time before adding more. Once the milk was incorporated I cooked the mixture for 10 more minutes over medium heat, stirring constantly. After seasoning with a couple tsp. salt and with nutmeg, my sauce was beautiful..! 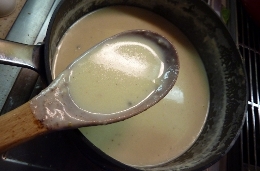 ..Almost as beautiful as me! I kid, I kid. (A little.). Now that all the elements of my Pumpkin Manicotti dish were complete, it was time to combine them. I spooned my pumpkin mixture into a ziplock bag, snipped off the corner, and used that as a piping bag for filling my cooked manicotti, which were laid in a 13×9″ baking dish, layered with bechamel sauce.

Once the manicotti were filled, I topped them all with the remaining bechamel sauce, and sprinkled with sage. These guys were popped in a 350 F oven for 25 minutes, until the top was ever so slightly browned and the sauce was bubbly. During the last few minutes, I also sprinkled a small handful of shredded Parmigiano Reggiano over the top of the dish.

Finally – time to eat! A select few articles of clothing were placed back on (because, I agree with Rachel, “I’m not sure yet where I stand on eating in the nude” – good call!) before digging into the manicotti. Really though, I wanted to open my blinds back up so I could photograph my food, and figured our neighbors could do without a view of my bare a$$. 😉

Wow – heavenly! Steaming hot, a strong hint of warm spiciness, super rich and creamy. I must say I was rather impressed with myself – these tasted extremely similar to the Pumpkin Manicotti at Seva, which was my inspiration for this dish. And not only that, but they were also cooked in the nude! I would say it wasn’t spot-on (my white sauce was lacking the goat cheese that theirs contained, which may have added a bit more richness), but they were absolutely delicious. 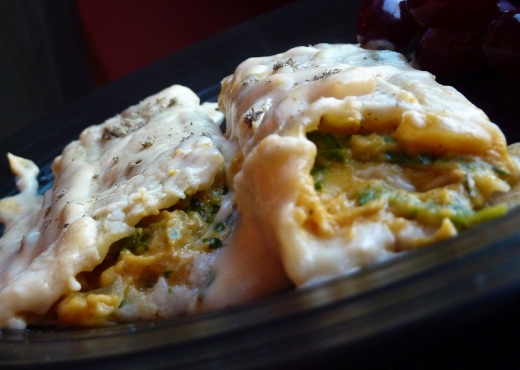 I opted for red grapes as my side dish, just as Seva had done. Sweet, crisp, light grapes truly are the perfect complement to the rich, creamy manicotti dish.

Enjoyed in the company of my new buddy. Isn’t he precious! 🙂 Love him.

Final Thoughts: Cooking sans clothes, in nothing but an apron, was surprisingly nice! It was a perfect 72 degree day outside, so it was a very comfortable temperature in the kitchen; in fact I think I would have been hot wearing clothes spending so much time over the stove, so it was perfect. I actually forgot that I was wearing just an apron after a short time, it’s fun being tasteless! 😉 It definitely added an element of sauciness to the cooking experience.

A saucy day indeed. And there’s glitter on the floor. Ke$ha would be proud.