Last night I was craving a BURGER! A big, juicy burger, to be exact. I considered trying a new Ann Arbor burger joint – @Burger, but have read less-than-stellar reviews for the place (if you have tried it, I’d love to hear what you thought!), so decided to go with a tried-and-true! Sidetrack! If you regularly read MGNN, you must know that I am a lover of Sidetrack (the SATC episode where Carrie states she is ‘taking a lovaaa’ – aka Alexandr Petrovsky – just popped into my head after typing that). For as many times as I have been there, I have STILL never had one of their burgers, even after reading this on their menu so many times, “Our Famous Handcrafted Burger – Rated one of the nation’s 20 Best Burgers by GQ Magazine.” It did not disappoint! But my picture is terrible: 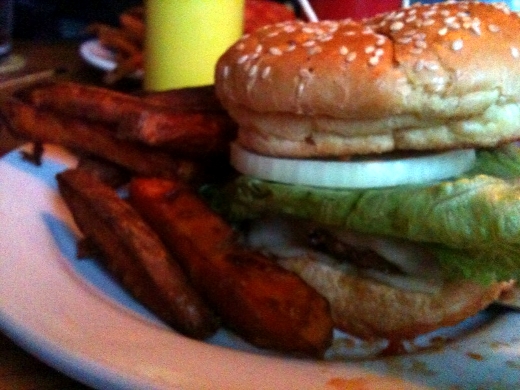 It totally does not do justice to the juicy 1/3 pound of juicy, beefy goodness hidden beneath the lettuce. To remedy that, I would like to provide you with and old photo I have on hand, of one of Sidetrack’s burgers ordered by a fellow diner of mine in the past, below. Perhaps now you can appreciate the beefy goodness. My burger was accompanied by amazing sweet potato fries with homemade horseradish sauce. I should also have mentioned that my burger was preceded by a healthy dose of BEER BATTERED PICKLES. Oh god. Pure ecstasy. 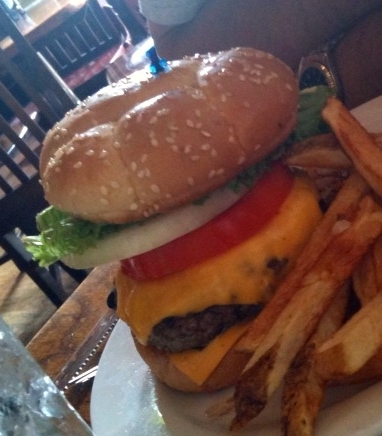 Dinner was followed by a Like-It size Pumpkin Cheesecake ice cream from Cold Stone. I am on their email list, and after receiving an email displaying this ice cream, I have been fantasizing about this new seasonal flavor all week. And last night – I HAD to have it. It was so necessary. And it certainly delivered. I guess I was expecting a pumpkin flavor accompanied by the prototypical cinnamon/nutmeggy warm spices, but that was not the case. It was more like straight up pumpkin mixed with cream cheese. It was super rich from the cream cheese, and thick and lush. Yummay! ❤ 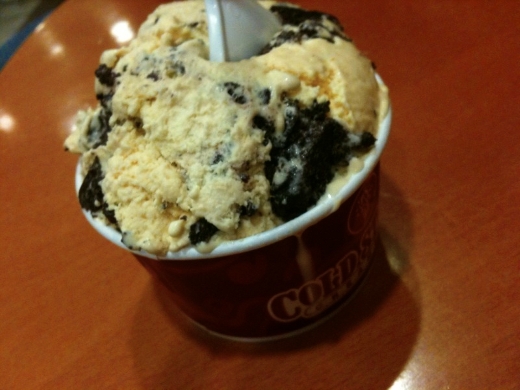 It does not get better than this, nommers.

Alright, I am off to brew some strong coffee, make some lunch, and get some stuff done around the house today! Have a great Saturday!