After writing today’s earlier post, I extricated myself from my Snuggie Cocoon and decided it was time to get my butt in gear and cheer up. I went downstairs and queued up my Gaga playlist. Impromptu dance/karaoke party in the MGNN kitchen. Ain’t no thang.

I also lit my favorite candle, Sweet Cinnamon Pumpkin (just bought myself a second, bigger one as a lil Christmas gift to myself).

And since the house was sounding good, and smelling good, I figured I might was well make something that tastes good too. A hot mug of hot chocolate seemed to fit the bill. Yesterday at the store I found “diet” Hot Chocolate, which only has 25 calories per packet! I was admittedly a bit skeptical. “Regular” Swiss Miss has 120 calories per packet, so this seemed too good to be true. However, I tried it out and it was awesome! I couldn’t even tell it was diet. (I also haven’t had Hot Chocolate in at least a couple years, so I may not be the best judge, but I still think I can make a pretty fair judgment). As a bonus, the package boasts that each packet contains as much calcium “as a glass of milk.” Definitely a perk. I love this stuff! 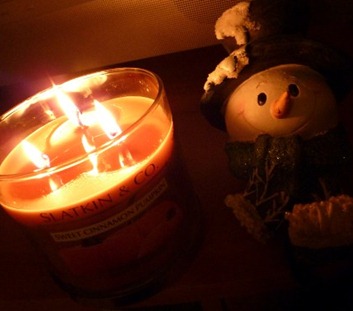 Now that my mood was sufficiently improved, it was time to start cooking. I actually prepared a side dish for later this week, made a soup for tomorrow, prepped some veggies, and then made dinner for tonight – all this afternoon. Can you say productivity?

I love the great volume of veggies in this soup: broccoli (about 3/4 of a big head of broccoli is hidden in that bowl!), celery, carrots, and potatoes. The recipe suggests using frozen cubed hash brown potatoes for convenience. I had some Yukon Golds on hand and decided to cube up a few of those in place of the hash browns.

Mmm how about a big ol’ warm bowl of cheesy soup on a cold winter day? I served the soup with a loaf of warm cheddar bread (Take and Bake from Meijer!). Tip: Dip your bread in your soup – it’s like cheese fondue, a.k.a. heaven! Except it is guilt-free! A one cup serving has 143 calories, which means, if you eat a giant 3-cup bowl like me, it’s less than 500 calories! Delish and nutrish.