I’ve been eye-balling the olive bar at Whole Foods for some time now, and yesterday I finally picked up a few. Really, one of the primary reasons I did was that I didn’t want to go through the check-out with only a bottle of booze (can you say raging alchy?), so I figured a little salty sustenance would balance things out. Oh and yes, I have lost wine glass privileges in my house for a while, since “the incident” occurred last summer (which basically involved a very full glass of red wine in a wine glass, my laptop, and me flailing my arms around in anger. I’ll let you put those pieces together). So now when I have to go upstairs with my wine, it is housed in a nice double-old fashioned glass.

The wine I purchased was called simply labeled “Red Wine” by Rusty Boar. This is from an unidentified winery in Washington State. I thought it was just fine. It wasn’t very full-bodied or intensely flavored, but rather mellow and I detected blueberry. Paired with the salty olives, it was mildly sweet and smooth indeed, enjoyed before we went out last night.

I was looking at my pictures from The Love Bang! last night and realized that I am dressed like a 12 year old. Woops. I did no advance outfit planning for The Bang! this month like I typically do, so this is what got thrown together last minute. Eh, it works.

I am ridiculously excited for the theme of March’s Bang, near St. Patty’s Day – the Gay-Lick Bang!!! 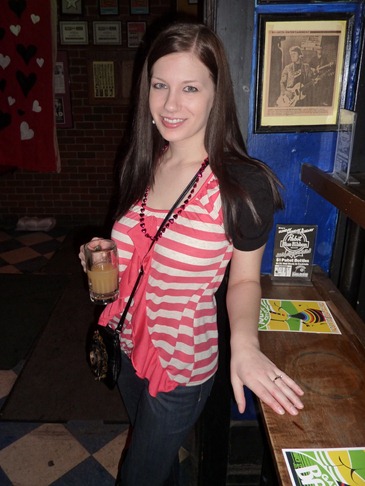 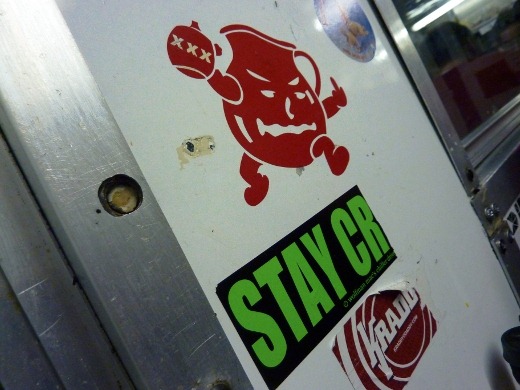 I really need to tell you about the burger I had last night.

Since we had breakfast for dinner at home yesterday, for our late-night post-bar eats, we ordered non-breakfast fare at Fleetwood. I’ve been wanting to try their burgers for a long time and last night was a good opportunity! After giving our server my order (“Bacon Cheeseburger”) she asked if I would be interested in trying their 50-50 Burger, followed by an explanation of this gluttonous creation. So simply put, the burger is half beef and half bacon, ground together. And, if you order the “bacon cheeseburger” there is even more bacon on top. Now, it is a documented fact that Fleetwood has some of the best bacon around, so this basically sounded like pure ecstasy. Oh, and let’s be honest, there are few foods I wouldn’t try at 2AM. Especially after my server devilishly described the burger as “EVIL GOOD.” Oh, honey, I’m game.

Oh, and DUH it was amazing. I’m sad I didn’t capture a better picture, but it was pretty much as awesome as you would imagine it to be. After I took my first bite, I saw pink bacon throughout the beef patty. And not like rare-burger pink, but PORK PINK. Gah! No burger will ever be the same.

The huz ordered a Reuben and chicken wings [below].

Hot damn, we are a gluttonous pair. Also, I may or may not have been dipping onion rings in mayo at the end of this meal. Yeah, I don’t know. It’s just what Fleetwood does to you.

Today I needed to do something about these black bananas. Back in, oh, October, I saw this recipe for Peanut Butter Banana Bread in Cooking Light and I have wanted to make it. Months later, I finally got around to it.

One of the reasons I hadn’t made it was because the recipe called for ground flax and I had no means of grinding flaxseed. My sheer brute strength is somewhat lacking and I possessed no mortar and pestle nor an electrical grinding device. Recently I bought a burr grinder for the purposes of coarsely-grinding coffee beans for my new French Press, so I was able to use this device to grind my flaxseed as well (I tried to clean it out as much as possible so I wouldn’t have coffee-flavored flaxseed).

I didn’t feel like buying powdered sugar for the glaze because then it would just tempt me to make things like frosting and such, so I just used regular granulated sugar and it was fine.

By the time I sliced it up for dessert, my natural light was fading! This was delicious but not quite as amazing as I had hoped it might be. The peanut butter flavor wasn’t as intense as I might have liked. But still very tasty!

For dinner, I finally jumped on the food bloggers’ bandwagon and make Kale Chips for the first time! I’ve seen these in dozens of blogs so it’s difficult to reference a single source, but I can say that Kath offered several tips for making your own Kale Chips.

I started with a big bunch of kale, stripped off the hardy stems, immersed in water to rinse clean, and gave the kale a spin in my salad spinner to remove excess water. 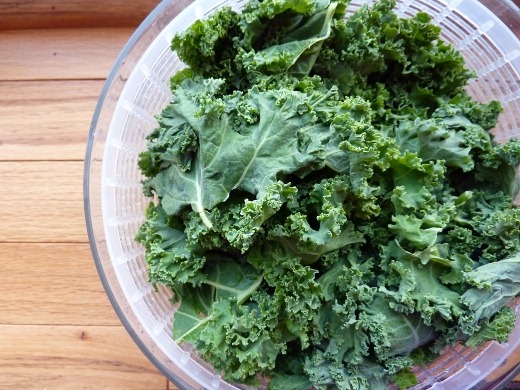 Next I put my kale into a bowl, drizzled it with EVOO, and used my hands to massage the oil into all the kale nooks and crannies. Kath and some other bloggers use cooking spray in place of oil, but I wanted to try the recipe using EVOO for this first time, though it does add calories (albeit healthy fats and calories!). Next I sprinkled on Cajun Seasoning (which contained salt, so I didn’t add much extra salt). (Sorry the pic is out of focus! Haha.) 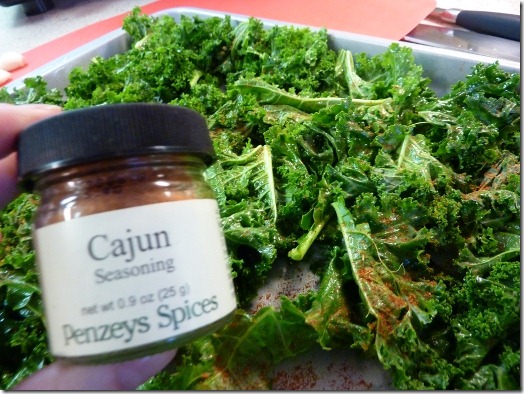 These guys baked at 350 F for about 15 minutes. These really taste best when you consume them within 10 minutes of baking while they are still crispy. They soften up quite quickly!

It took me several bites to get used to the unique texture of these Kale Chips! They kind of shatter in your mouth when you bite them and it is bit of an odd sensation. These were definitely really good, but I wouldn’t go as far as some bloggers do and say they are a substitute for potato chips. There’s just no way! However, it is an inexpensive, tasty, and easy way to add some greens to your meal.

For the main course, I again made Saucy Mushroom Chicken with Garlic Mashed Redskins, which I’ve blogged about before. Click here to read the original post and recipe links.

So yummy! I had some serious lighting issues with my photography today (see below)! Yikes! In general I was just being a klutz in the kitchen today. I bought natural, unsweetened peanut butter today, and when I opened it, I spilled the oil that lingers on top all over my kitchen floor, which made an icky oily mess! Then, about 15 minutes later, I microwaved a few pats of butter for a few seconds too long, and they exploded and melted butter was flung all over the inside of my microwave. Whatta fail!! Despite the ‘fails,’ everything I made today turned out well!

Currently listening to: Rolling in the Deep – Adele.