Crab cakes! Truly one of my favorite things. I should probably make a post summarizing all the crab cakes I’ve enjoyed. For now you can just search “crab cakes” in the search box on the right hand side, if you’re realllllly interested in checking out my plethora of crab cakes.

For as much as I love them, I have never made them. Actually last year the huz made me crab cakes for Valentine’s Day, though. You can see them here. They were good, but I can’t lie, these ones were better. (Sorry Tom.) My recipe was a bit meatier.

Recipe from Taste of Home

The original recipe makes 12 crab cakes, but I instead added only about two-thirds of each ingredient and instead made eight crab cakes. Mostly because I didn’t need 12 crab cakes for two people (but that would be admittedly be somewhat awesome), but also because I am cheap and I didn’t want to buy so much crab. Lump crab is pricy! I actually used one-third lump crab and two-thirds pink crab to save a few dollars (all canned).

The huz and I each ended up eating three for dinner, along with maple-roasted carrots (which I burnt a little – opps) and a romaine and spinach salad, heavy on red and green bell pepper slices.

Even though these are called “Sweet Potato Crab Cakes,” I honestly couldn’t detect the sweet potato flavor. Weak.

Also, FYI, I really, really do NOT like Whole Foods’ 365 brand Italian Bread Crumbs. The texture is far too fine for me, and the flavoring just seems off. I really do not recommend them. Recently I made onion rings using these bread crumbs, and they left a non-pleasing flavor which I also detected in these crab crakes. Luckily there were lots of other seasonings to mostly masked the bread crumb flavor, like parsley, Old Bay, and a Southwest seasoning blend (I mixed up my own using this recipe rather than buy another seasoning blend I don’t need!).

Overall these crab cakes were pretty solid! Not the best ever, but very solid.

Tuesday evening I had some barbeque that almost didn’t happen. Not quite the epicness that our group had originally planned, but we found a back-up spot and nibbled on some fried pickle slices to start. I’ve expressed my preference for spears many times in the blog, so I won’t bore you by going on and on.

These were pretty solid though, again. 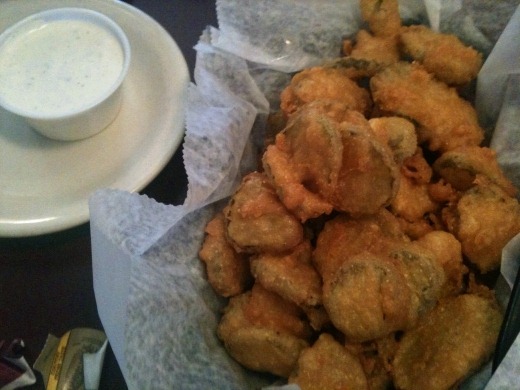 Also drank some Bell’s Porter with dinner, and later, Espresso Love Stout at Corner Brewery. Rockin’ the local Michigan dark brews! May or may not of had some bites of something resembling this later in the evening.

Probably not. But maybe. I can neither confirm nor deny.

In Fitness News, I have to say that since completing the 30 Day Shred Last week, I have been in a bit of an exercise slump. I took about four days in a row off exercising. I had zero motivation. After four days, the next day (this past Monday) I started doing Level 1 of the shred and just wasn’t feeling it. So I turned it off and instead did 30 (of 39) half-a$$ed minutes of Jillian Michaels’ 6 Week 6 Pack video. I say half-a$$ed because 1) I turned off the video early (I hate quitting early!), and 2) I wasn’t pushing myself very hard at all. Felt pretty frustrated afterward.

Yesterday I was eating BBQ and drinking beer, so working out definitely didn’t happen. Tonight, though (Wednesday), I was feeling it! On the way home from work, I drove by a girl running down my street and thought to myself, “tonight I should run!”. Then… the sun came out!

So… I have been wanting to run for months now. So many of the bloggers I follow are runners and it’s really inspiring to read about how they went from being a total non-runner to a serious, accomplished runner! Also my BFF is a half-marathon runner! So baller!!

But the only thing is.. I’ve always hated running!!! I still have horrendous memories of running “the mile” in gym class back in grade school. Hated it. So my running self-esteem has basically been shattered and nonexistent for my whole life. But I really feel like I could get into running if I approach it the right way. I am all about setting goal and trying to beat them.. i.e., today I will run X miles and beat X time! I can see myself getting into that!

When I read about the Couch to 5K Program several months ago I really wanted to try it! Except I couldn’t see myself running in 15 degree weather and snow-covered grounds that tend to hang around for several months during the Michigan winter. So I decided to wait until spring to start. To kick-start the program, I decided to challenge myself to do the 30 Day Shred, which is now done, so now I am hoping to move on! I don’t want to jump the gun, because who knows how this will go or if I will stick to it, but I’m pretty excited to start! I’m hoping blogging about it from time to time will make me feel more accountable to stick with it!

“Brisk five-minute warm-up walk. Then alternate 60 seconds of jogging and 90 seconds of walking for a total of 20 minutes.”

We did it!!! I used GoogleMaps to try to determine how far we went, and it looks like our warm-up walk was about 0.4 miles, and then our 20 minute walk/run was about 1.6 miles long (12:30 mile pace – gotta start somewhere!). I’m so proud of myself!

So the plan is to run three days each week, and build up my endurance, after after nine weeks I am supposed to be able to run a 5K (around 3 miles)! Who knows what will happen, but I am excited to see!

I need some sort of sports watch, because I was running around with my iPhone in my hand to time the intervals – probably not the best idea!

Currently listening to: Written In The Stars – Tinie Tempah.