Beer! I’ve been on a beer-kick lately. After work on Friday evening, a beer sampler seemed like the perfect start to the weekend. I ordered a 7 beer sampler at Grizzly Peak. (The front ones are mine, and the back ones are the huz’s, just to clarify!). 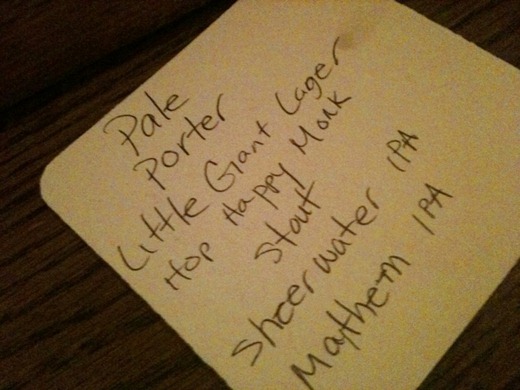 Actually, the primary reason I wanted to go to Grizzly Peak was for the Cheddar & Ale Soup. While I was eating this bowl, I declared that it was the “best thing I’ve eaten in at least a month.” With bread dipped in it? I just go weak in the knees into a total swoon.

Last summer, while at the Traverse City version of Grizzly Peak – North Peak – I enjoyed a similar bowl of soup, a White Cheddar Ale topped with mustard pretzels which was just nearly as amazing.

For dinner I ordered a Chopped Salad, consisting of Citrus Vinaigrette-tossed romaine topped with scallions, bacon, tomatoes, chicken, blue cheese, and avocado. It was very good. I could only eat half and brought the rest home!

Last time we were at Grizzly Peak we ordered dessert and it was just amazing, so we couldn’t resist trying another dessert: Chocolate Truffle Cake, “Flourless chocolate cake studded with rich chocolate truffles and served warm with espresso ice cream.” It was just as incredible as the menu description sounds.

After dinner we saw the new Natalie Portman movie, “Your Highness.” I wasn’t a huge fan. NatPort didn’t have a huge role and the movie just seemed to fall short for me. I’m still glad I saw it though – I can’t pass up a NatPort movie.

Today (Sunday) it was SO warm! According to the Weather Channel, Ann Arbor reached a high of 83 degrees today! Unreal! I opened up the windows in my house (and they’re still open at 10:30 at night!) and a lovely breeze flew into the house all day. With the sun and warm weather, I had no excuse to not go running today.

Today was the first time that I tried tackling a Week 2 workout in the C25K program that I am doing: “Brisk five-minute warm-up walk. Then alternate 90 seconds of jogging and two minutes of walking for a total of 20 minutes.” I’d be lying if I said this wasn’t challenging – it was! But I DID do it! After 5 minutes of walking, I did 20 minutes of run/walk intervals for 1.8 miles – which would be 11:07 mile pace. Hey, that’s better, right!

Currently listening to: In The Next Room – Neon Trees.