This week I tried a relatively new barbeque joint in Ann Arbor called Satchel’s BBQ, located in a somewhat hidden location on Washtenaw Ave. I appreciated the simple menu – I always respect a few dishes done well over a large selection of so-so dishes.

I ordered the Pulled Pork plate, which, for ten bucks, came with two sides, some bread, and free refills of fountain pop or tea. My two sides of choice were mac ‘n’ cheese and baked beans. The baked beans were smoky with a nice thick sauce – I thought they were solid. The mac and cheese was creamy and yummy too, probably my favorite part of the plate! The pulled pork serving was very generous and very meaty! Loved the large chunks of meat as opposed to the tiny shredded morsels that can be found at other establishments.

After taking this picture I added a LOT of sauce. On the tables were bottles of various sauce, including House (just meh), Hot (good, not quite hot enough), Sweet (good, but a little fruity), and Carolina Vinegar (added several splashes and it oomphed up the dish). I believe there was also a mustard sauce that I did not try. Sorry to all you mustard fans. The bread was pretty plain and sad, but the rest of the plate made up for it.

The huz ordered a half-rack of ribs with baked beans and cornbread. I had a bite of the ribs and, as the huz declared, and I agreed, they “tasted like campfire.” Yes, that is a good thing. Yum! 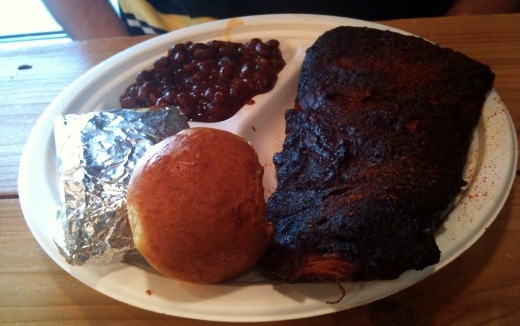 Dessert was randomly delicious! The huz strolled up to the counter in search of something sweet for dessert and returned with two of these brownies, “for charity.” No idea if they were made in-house, or by someone else, but these were KILLAH! Honestly some of the best basic brownies I’ve had. Super thick, fudgy. Mmm.

All in all dinner was really good and I can see myself going back to Satchel’s. 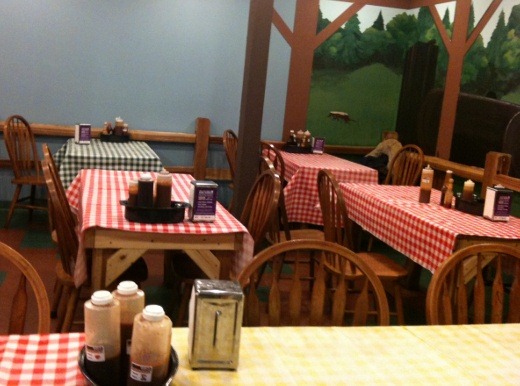 Friday afternoon, and evening has been somewhat stressful, as I’m packing for a trip tomorrow, trying to make sure I am all set! I was happy to not have to cook, and instead kick off our vacation with a little Red Robin, courtesy of a gift card from my parents – thank you!

To start, we ordered Spinach and Artichoke Dip. Yum, of course.

For dinner I ordered the Whiskey River BBQ Chicken Wrap (I heart wraps!) which came with fries and melon. Delish. Ate every last bite!

Today I took a break from packing and did my Couch to 5K Run. Today was my Week 5 Day 3 run, which is 5 minutes of brisk walking, followed by a 20 minute run with NO WALKING! I was really not confident I could do this and had doubts, but set out with the goal of doing the best that I could. Once I reached 8 minutes, I told myself I would try to get to 10 minutes, and once I reached 10 minutes, I kept telling myself that I would run just “one more block,” over and over, until I got to around 15 minutes, and then I just told myself I had to run the whole thing. So I trucked along, running my last couple minutes up a relatively large hill, which was somewhat painful, until finally I was at 19:30 and I KNEW I was going to do it! I actually felt really emotional at that point. I never thought I could do this run and just amazed myself that once I started and told myself that I could, I COULD! Maybe that’s cheesy but I felt, and feel, really good about myself!

I think one of the things that has helped me a lot this week is that I feel much better over controlling my breathing. Before I would be gasping for breath every two steps, but today during my run I mostly maintained a steady breathing pattern (inhale, 3 steps, exhale, 3 steps), and focused on taking deep breaths with my stomach, instead of shallow breaths with my lungs. But what do I know? This is just what worked for me.

In the next few days you can expect some updates from the West Coast from me, so stay tuned! I am bound for PALM TREES!

Currently listening to: Zombie – The Cranberries.