Like nearly every other food blogger out there, I too have been getting my rocks off getting my socks knocked off by pumpkin this September.

Today I tried a recipe from the Oct/Nov ‘11 issue of ToH Healthy Cooking magazine.

While a large pot of water was being brought to a boil, in which I would later prepare frozen cheese ravioli, I set about making a Pumpkin Alfredo Sauce, using these ingredients, as well as some butter and garlic.

Yikes – this blurtastic mess, below, was the best picture I got of the sauce, as it reduced and thickened while I simmered it on medium-low for 15 minutes, stirring frequently to avoid burning the milk-based sauce. The sauce thickened up beautifully!

Once the pumpkin alfredo had thickened and the seasonings were adjusted, I simply tossed the cooked cheese ravioli in the sauce, topped with toasted walnuts, and served! I did make a couple minor modifications to the recipe, including substituting dried sage for fresh sage, and omitting pine nuts and using extra walnuts instead. I also added around a tablespoon of brown sugar to the sauce.

Mmm, this was truly wonderful! The sauce was simply decadent, so rich and creamy – restaurant quality sauce! I couldn’t get enough of this comforting and luscious dish -a new fall favorite for me. I would say I liked this better than the Pumpkin Manicotti I made last fall (which is actually one of my most popular posts!). 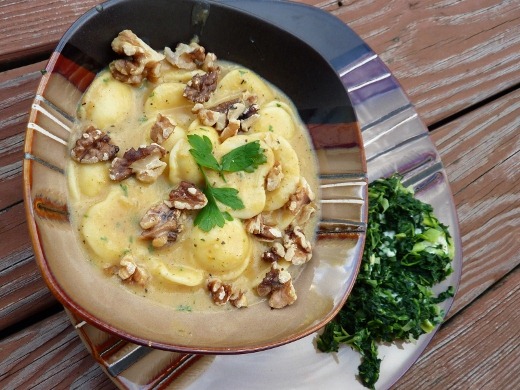 In case you’re wondering, I served a ‘light’ version of Creamed Spinach with leeks on the side. 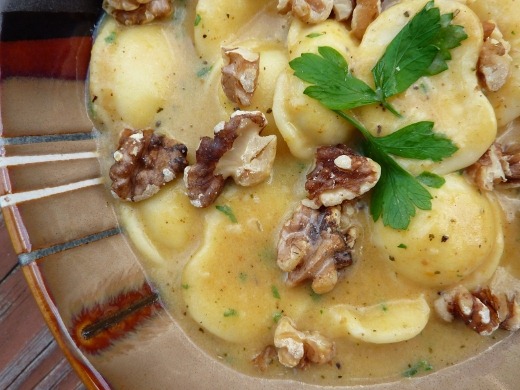 Currently listening to: Santa Monica – Theory of a Deadman.