This past weekend I ran in my second race, the Big House Big Heart 5K in Ann Arbor. If you missed my first 5K race recap last June, the Dexter-Ann Arbor run, you can read about it here.

I decided to walk the 1.25 miles to the stadium from my house, rather than fight traffic driving to the Big House. I was sure glad I did – the Pioneer High School parking lot, across the street from the stadium, was turning people away by the time I passed. Plus, I didn’t have to pay to park!

The race had a 9:10 AM start time, and racers lined up outside the stadium. You could not have asked for a more gorgeous October morning! It was in the low 60s and sunny prior to the race start.

Bodies everywhere. I tried to line up near the 10:00 minute/mile pace sign, but I don’t think anyone was paying attention to the pace signs, to be honest. I, for one, was more concerned with the woman in a chicken costume lined up beside me.

I prefer to race in pink.

While I was running, the huz was seated in the stadium as a spectator. He took the next three pictures. 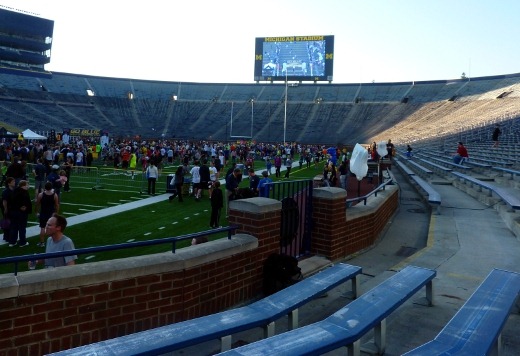 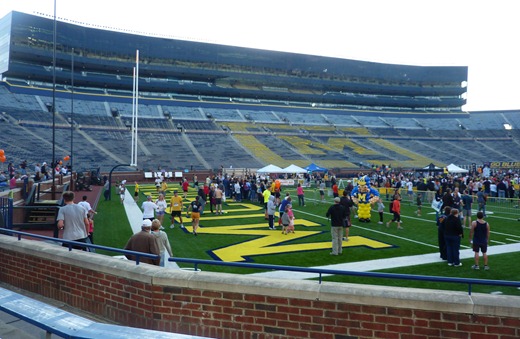 The race course was pretty much awesome. We started beside the Big House, ran by my old apartment building on Benjamin Street, ran up to Madison Street, past the 10-bedroom house I lived in one year, past my freshman year dorm South Quad, past my former college place of employment West Quad, and all around the Diag where my college classes were held. The course never got boring! Every so often there were speakers set up playing music, percussionists banging drums and cymbals, a steel drum band playing Taio Cruz, an accordion player, and people in animal costumes. There were also many spectators along the course, which made it interesting. There were two water stations, and I stopped at the first one, but not the second.

The first mile involved lots and lots of weaving in and out of people. I wish the walkers would line up at the back of the start line! It’s a pain trying to weave in and out! And often, it wouldn’t just be a lone walker, it would be a group of six people walking side-by-side, clogging half the road. This definitely slowed me down. Gah! Rant complete. So yes, the first mile involved lots of weaving, and also a pretty big hill up Division Street. I used to hate walking up this hill as an undergrad, so I wasn’t too thrilled to run it, but since it was at the beginning the race, I was still running on endorphins and the hill barely phased me! Before I knew it, I was running down State Street and my Garmin alarmed to let me know that one mile was down.

The second mile circled around the Diag, which was lots of fun to run through! During this mile I slowed at the water station and grabbed a cup of water. I may or may not have amateur-ly snorted a little water. Tee hee.

After circling the Diag, we headed back toward the stadium, and back down State Street. This stretch of the race is a fairly steep DOWNHILL, so I was BOOKIN’ it! I had started out rather conservatively, since I hadn’t trained particularly hard for this race over the past month, but I was realizing that I had a lot of steam left, so my final mile was actually my fastest.

The last stretch of the race approached the stadium, and all the runners were becoming very lively and excited! Some were struggling while their running companions offered encouragement that we were “almost there!”, while others picked up their pace for the final stretch. I definitely picked up my pace as we were running the final stretch toward the stadium. The course narrowed in the final stretch, but that didn’t stop me from passing tons of people. Oh yes I did.

Finally we made it to the stadium, and ran into the tunnel beneath the stands, from which the football players emerge at every game!

So…the tunnel was dark!! I had to take my sunglasses off so I didn’t fall! I also didn’t realize, that tunnel is downhill and steep, into the stadium! Everyone started torpedoing onto the field, but it was slightly anticlimactic, because when I emerged from the tunnel, there was a person being attended to, who had eaten the ground. Ouch! I hope you’re okay, but PLEASE MOVE!

As you run onto the field, you can see yourself on the scoreboard, running toward the finish line! Heck yeah I sprinted to the end! My speed shot up from between 5-6 mph to 9 mph in the final stretch, according to my Garmin. 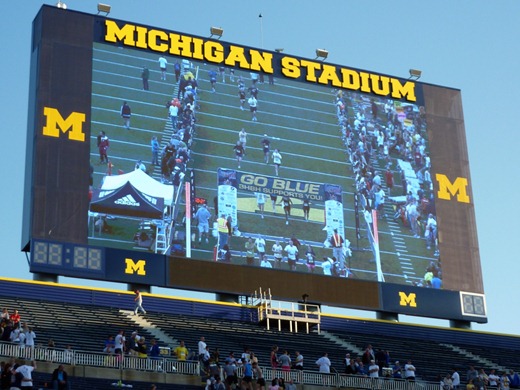 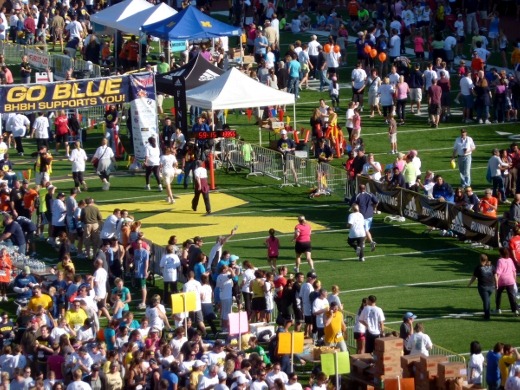 So many bodies on the field! 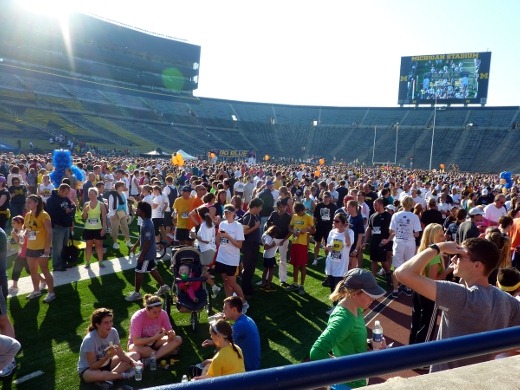 Here are my stats:

In any case, my “chip time,” measured by the “chip” in my racing bib was: 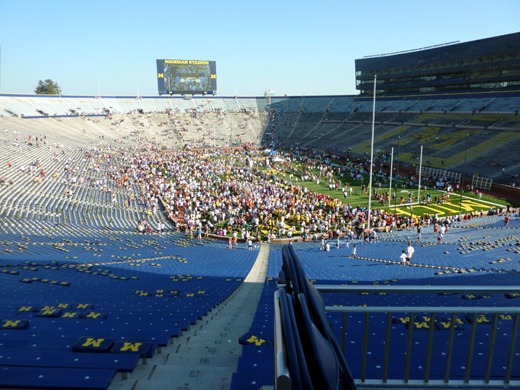 This race was so much fun! I had considered not running since I hadn’t trained much in September, but, as expected, I was very glad I ran. Of course, on the 1.25 mile walk home, I was already talking about signing up for more races. Muahaha.

After we got home, we drove back downtown in search of food, and probably walked at least another mile or so trying to find an open, non-crowded place to satiate our hunger, which ended up being Seva, where I ordered a Caprese Omelet, filled with basil pesto, tomatoes, and mozzarella, with rye toast and roasted redskin potatoes with rosemary.

..and Stuffed French Toast for the huz. Unfortunately our service was ridiculously slow, which may cause me to reconsider returning in the future. It truly was unacceptable, and I’m typically fairly patient. (But my patience is wearing with age! Gah!). 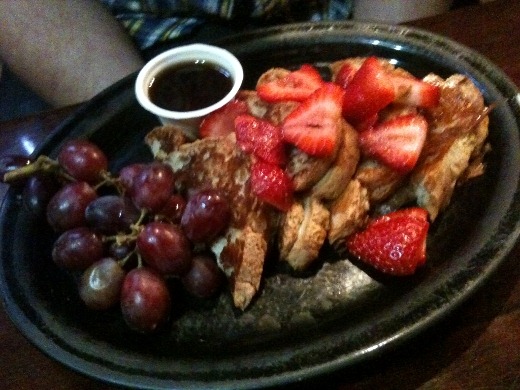 After traversing a good seven miles by foot on Sunday, between getting to and from the race, the race itself, and walking downtown, after brunch I was WIPED OUT! Yet I somehow still managed to run errands and go to orchestra rehearsal. Phew. Any now it’s Monday. RUSRS!?