It just wouldn’t be the beginning of a new week without my weekend nomming update, amirite?!

Friday, hitting up a semi-quaint bar for cocktail hour was attempted, but, not wanting to wait for a table, my dining companion and I hopped across State Street and hit up Buffalo Wild Wings for some dranks and nibbles before our dinner reservation back on the other side of State Street.

Bdubs didn’t have any enticing beers on their menu (I’ve possibly become a beer snob), and it just feels wrong to drink wine there, so I ordered a cocktail called Wild Punch with Skyy, SoCo, Amaretto, and Sweet and Sour Mix. It was actually pretty good – very sour which tamed the sweetness that can often overpower their drinks.

The Basket of Guilty Pleasures.

Good LAWD! So wrong, yet so right. I think it’s actually called the Tailgating Sampler (shown below) or something along those lines.

The Smoked Salmon Pizza Appetizer was OUTSTANDING! And oh-my-word, it was under ten dollars, too! Cream-cheese slathered crust covered with a generous portion of amazingly delicious smoked salmon, red onion, arugula, and capers. (Yes I ate the arugula and capers. I’ve come to the conclusion that in most cases, I can learn to like nearly any food after trying it at least three times.) Devoured [half of] this, promptly.

As I alluded, I’ve been to Sava’s three times now, and all three times I’ve ordered this Argentinian Malbec. 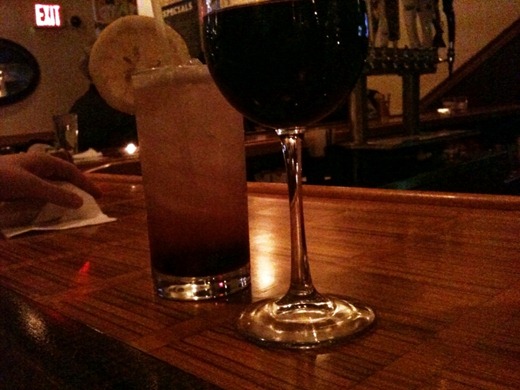 After appetizer-binging, I ordered this Greek Salad, but I could only eat about 1/3 of it, and brought the rest home for lunch the next day. Can you believe this was eight bucks!? The bowl is actually quite deep, with an ample layer of baby greens beneath a plethora of goodies: tomatoes, gobs of feta, pepperoncini, cukes, beets (eek! still haven’t learned to like these canned guys), kalamata olives, chickpeas, and pita bread! Good stuff! 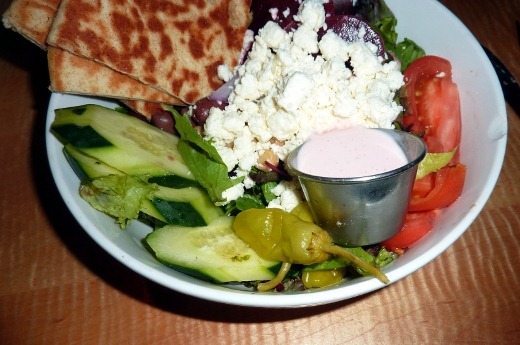 Clearly I only ate 1/3 of my salad because I was saving room for IORIO’S GELATO! I am definitely going through a gelato phase right now. For a while it was cupcakes (and I’m sure I will relapse!), but now I am still going strong for gelato!

Quote from me, post-dinner and cocktails, whilst eating gelato, “Good thing I’m not vegan because there’s meat in my dairy.”  Yesssss.

I kid you not, friends, there were chunks o’ BACON in my gelato. Iorio’s you had me at “bacon.” 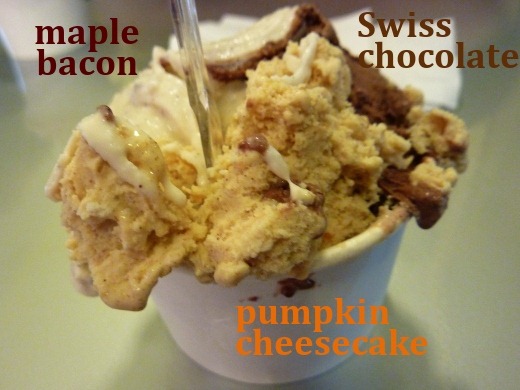 This weekend I also saw the movie “Answer This!” which was filmed entirely in Ann Arbor (and doesn’t pretend to be elsewhere!) and takes place at the University of Michigan and local bars. This was quite fun to watch! In every scene, I could tell where the actors were filming.

Click HERE to go view the trailer for the movie – it’s pretty fun to watch if you’re at all familiar with Ann Arbor or the U-M campus. 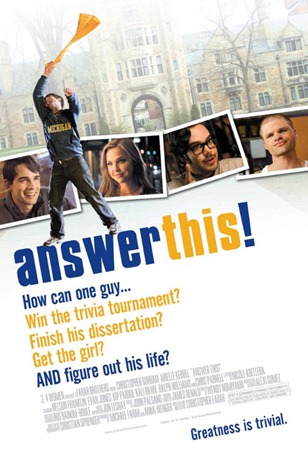 Saturday I didn’t cook a thing, and Sunday I cooked and baked up a storm, so I shall be back atchu in a future post with those details.

One thought on “Sava’s–Take III”