I have been inundated with Mexican food the last two days! Last evening my BFF and I met for dinner at a random place to which neither of us had ever been, located halfway between our houses, called La Herradura, in Hartland. I’m always a tad skeptical of plaza restaurants, for some reason… 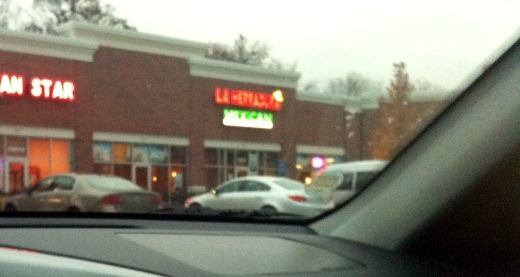 …but it was actually pretty cute inside.

Now for the food.

We were first served complimentary chips and salsa. The chips were simply average (thin, not especially crisp, lacking salt), but I was a bigger fan of the salsa. It was more of a thick puree, which is what I like in a salsa. While I do enjoy a chunky salsa, it’s only good if it is thick AND chunky. Big chunks in watery sauce = not good. This salsa, however, was not chunky, but it was a consistent, thick texture, and it tasted good too.

I had a glass of sangria with dinner but it was clearly not homemade – definitely a pre-made sangria. It was just so-so, but it was cheap, so whatevs.

For my entrée I ordered a combo in which I could pick two items accompanying beans and rice. I selected a chile relleno and a tamale. The chile relleno is shown covered in a red sauce below, and was a battered and fried poblano pepper stuffed with hot, melty, oh-so-heavenly queso blanco. My tamale was equally tasty – that sweet, grainy masa dough is so comforting. I loved my two selected items. The beans and rice were quite good too. I can’t lie, I ate every.single.bite of my plate. It was better than expected! (Plus only $8.99. Whenever I eat in restaurants outside of Ann Arbor, I feel like everything is such a deal! Food is so pricy in A2.)

After that GIANT Mexican meal, today at work we were treated to lunch, and I had a big, yet unpictured, Legumbre Burrito from Bandito’s, filled with beans, salsa, guacamole, sour cream and cheese. It was alright but didn’t knock my socks off. La Herradura’s food was more impressive, at least based on my first impressions of both restaurants. It’s always fun to try a new place, though.

As part of the Foodbuzz Tastemaker Program, I received a free jar of Classico Light Creamy Alfredo Pasta Sauce.

Honestly it’s been a while since I’ve used store-bought alfredo sauce. Typically it’s quite laden in calories and doesn’t really fit into my Calorie Counting lifestyle. Back in college, however, one of my more frequent easy meals was simply cooked pasta topped with either jarred alfredo sauce or prepared pesto, accompanied by frozen garlic bread. (Hello calories!!!). 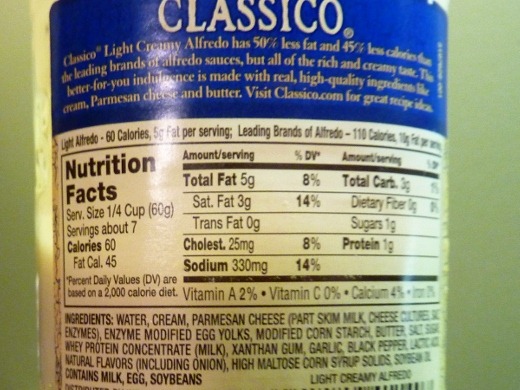 Plus, it only takes 5 main ingredients. Claire Robinson would be proud. Not including a few freebie items from the pantry.

And guess what!? It was GOOD! Like…really good! Not just my dish, but the sauce too. Not gonna lie, I swiped my finger tip along the lip of the jar to taste the sauce and guess what!? It did not taste light at all. Classico: I’m impressed, I gotta say. Typically my calorie counting philosophy is to enjoy everything in moderation. To allow myself to enjoy the indulgent items I crave, but again, in moderation. I don’t always necessarily like to skimp out and buy the “light” or “reduced fat” versions of items because it’s often more satisfying to enjoy a smaller portion of the “real deal,” however, I couldn’t even tell this was the light version.

Disclaimer: This is my honest opinion, I’m not being paid for a good review. 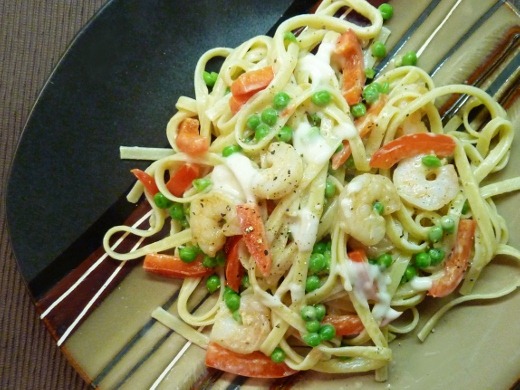 Serves 2 hungry people. (Maybe 3 if you serve it with salad or bread.)

1. Cook pasta according to package instructions.

2. Heat EVOO in skillet, over medium-high heat. Add shrimp, and sauté. It only takes a few minutes to cook. Once it turns opaque, it’s done!

3. When shrimp is just shy of being cooked through, add sliced red bell pepper, and sauté until crisp-tender. Season shrimp and veggies to taste. I added lots of Black & Red Spice (which again, contains black pepper and cayenne pepper) for heat, as well as Old Bay seasoning, salt and pepper.

4. Add thawed peas and cooked pasta. Let the dish heat through for a minute or so.

Well, you’re in luck. I have two daily anecdotes for you, dear reader.

1. A few minutes ago I sent this text to the huz, “If you want to get them on the way home tomorrow it’s okay. But you gotta discard corpse tonight.” Uh….what!? Well, this evening I had the unfortunate displeasure of discovering a dead mouse body in my basement. Hooray. So “them” = mousetraps. “Corpse” = well, you can figure that out.

2. My big toe joint (that’s some scientific anatomy terminology right there) is JACKED up. Here’s a tip, dear reader: if you are crazy like me and jump around your loft to do OnDemand Exercise TV videos, do yourself a favor and throw some tennis shoes on your feet. Doing barefoot jumping lunges is just a bad idea. BAD IDEA. Trust me.

Currently listening to: Shake It Out – Florence + The Machine.

I love this song. I love the lyrics. “It’s always darkest before the dawn.”