Fresh thyme smells so amazing. It’s once of those herbs where using fresh makes a huge difference, in my opinion. It also keeps well in the fridge for quite a while, at least relative to other herbs, like basil.

With this herb, I made another Thanksgiving-inspired dish this weekend, using a recipe of Emeril’s that was featured on ABC’s Good Morning America: Wild Rice, Apple, and Sausage Stuffing.

This recipe is called a “stuffing,” but it doesn’t really seem all that “stuffing-like” to me, in that it is lacking a key element – bread! However, the stand-in starch in this recipe is, instead, a favorite grain of mine – wild rice! I just love that chewy, nutty texture. This stuffing is somewhat similar to the Sausage and Apple Stuffing I made in my slow cooker (with bread cubes!) last Thanksgiving… except I liked this version with wild rice better! 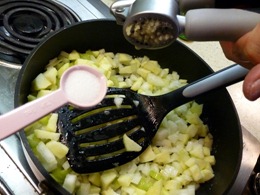 While my wild rice was cooking on the stovetop (until it was partially done, since it would later be baked), I did the following steps:

Into a baking dish the mixture went, and then, covered, into the oven for around 30 minutes, until it came out looking like this!: 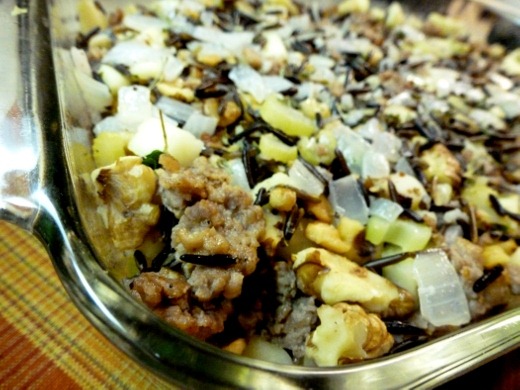 I totally loved this dish. It was full of textures from the crunchy walnuts, chewy wild rice, and soft apples and onions. I also loved the contrasting sweet bites of apple against salty bites of the pork sausage. The fresh thyme added a fresh zingy flavor to the dish as well. A winner! 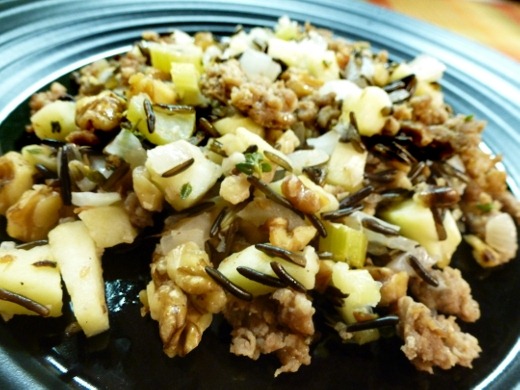 Ohmygosh I have to face reality after a long holiday weekend tomorrow. Daunting.

One thought on “Wild Rice, Apple, and Sausage Stuffing”