This weekend I had the pleasure of trying some delicious homemade food from a local food cart, carry-out, and catering business, called “eat.” 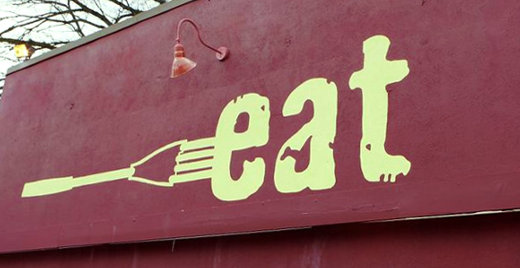 I first became aware of eat last spring, when I visited the business’ food cart in the Mark’s Carts courtyard; however, I had not tried their food until this past weekend. Just a few months ago, eat expanded their business by leasing a location that recently became available in Ann Arbor.

From this new location on Packard, I tried a few carry-out items, chosen from eat’s menu, which boasts the usage of “local and seasonal ingredients when possible, … from savory salads and tarts, to crostini, skewers, and gorgeously arranged platters—reflects our commitment to wholesome, imaginative, and thoughtfully prepared food.”

For myself, I ordered: 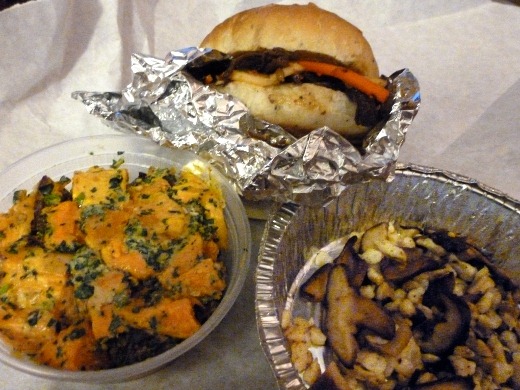 Below is a close-up of my Korean BBQ Beef sandwich. This sandwich was just fantastic! The beef was tender, bathed in a tangy, highly flavorful sauce, while the locally-sourced Avalon onion bun was the perfect beef-delivery-vehicle for this sandwich. Although, I would not have been opposed to an extra layer of toppings in addition to the daikon kimchi on this sandwich, for texture, and to decrease the bun-to-filling ratio. All-in-all, this sandwich was great, and worth the $8 price tag for the high quality ingredients used, such as grass-fed beef brisket.

The Mushroom Spaetzle I also highly enjoyed. The spaetzle itself was just about the largest, fluffiest and most tender spaetzle I’ve ever tried – just an amazing, homemade texture. The abundant mushrooms added a wonderful rich, earthy flavor. The portion size for this side dish was just a little bit on the sparse side, in my opinion.

The Tahini Sweet Potato Salad was good, but just a bit too much cilantro for my taste buds, so I probably wouldn’t order this side again. 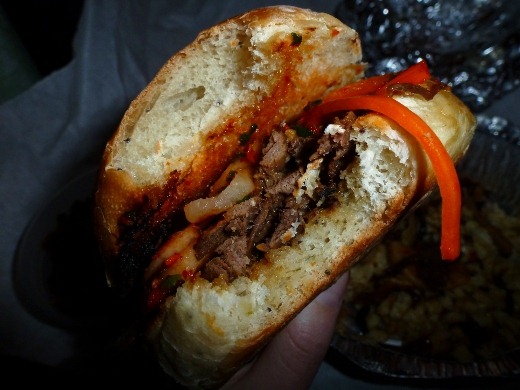 The final word: eat offers an interesting, frequently-changing selection of nutritious food made with quality ingredients. While the price tag for the meal was a bit steep for the portion sizes delivered, I wouldn’t hesitate to order from eat again, in order to a support a local business with admirable practices and delicious homemade food.

Brownies for Two…or One

Not long ago I stumbled across an ingenious blog, called “Dessert for Two.” As you might guess, this blog is a resource for dessert recipes designed to feed two people. So often I have wanted just “a brownie” or “a cupcake” or “a cookie,” but can’t justify making an entire batch and having the rest sit around the house… which I eventually have to eat (not good for calorie-counting lifestyle) or give away. So yes, pretty amazing idea! This weekend I found myself wanting, no, NEEDING a brownie. Normally I’m not one to hugely crave sweets (except gelato), but I’ve been cravings sweets like none other lately.

Having made chocolate truffles not long ago, I also found myself with a few extra squares of semi-sweet baking chocolate, along with all the other ingredients needed to make Dessert for Two’s “Perfect Brownies.”

Bonus: the amount of batter made with this small recipe could fit into a measuring cup. Easy clean-up!! 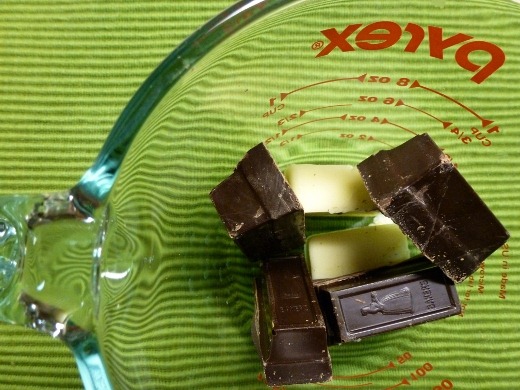 You might be wondering what sort of baking dish would hold a brownie recipe designed for two. The answer is: a loaf pan! Genius, I am telling you.

Half an hour later, I had warm brownies …and red wine. Mmm baby. While these brownies were delicious the first evening (though a bit more cake-like, than fudgy, which isn’t necessarily my preference), they became simply incredible the second day, when the texture became firmer and the brownies were denser and chewier. Swoon. Hurry up and go make these brownies. 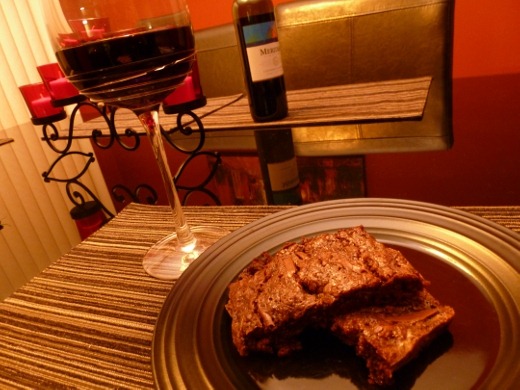