Happy Easter! It’s been a fun, chill weekend around here. Last evening the huz grilled a few Smoked Gouda and Portobello Biercamp brats, and this flavor was heavenly, just like last time we made them. On the side, I made one of our favorite accompaniments to grilled meats: Dilled Potato Salad, with cooked redskins, lemon juice, EVOO, fresh dill, crumbled feta, and salt and pepper. To round out the meal, we had a nice big salad. (I could only eat two of these brats!) 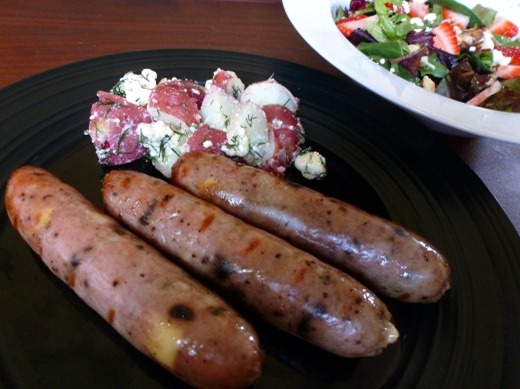 After dinner, Five Cent Femme and I had a pretty chill outing involving a trip to Dominick’s. We were able to engage in some most interesting people-watching because yesterday was Hash Bash, and many of those involved in the event were still milling around the campus. My first sangria of the year: 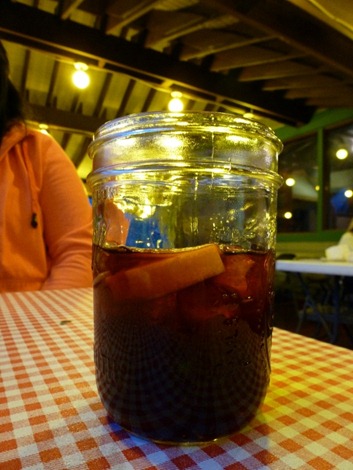 From our upper balcony seats, one of the objects of our people-watching was this guy, who was sitting in the grass across from Dominick’s, smoking, well something. About 20 minutes after we sat down, a cab came, the guy got in, and they drove off. Not five minutes later, the guy was back, approaching the Dominick’s entrance directly below our seats. Up the stairs he came, and into the chair at the empty table directly behind us he sat.

He sat there for maybe three minutes, then left, and went to sit in the grass again. A bit later, ANOTHER cab (different company) came, the guy got in, and we never saw him again. Maybe ten minutes later, a neon yellow mohawk-haired teenager appeared and asked the Dominick’s doorman about the whereabouts of “someone.” After the doorman asked the teen if he remembered “where he was sitting” the teen pointed to the location that the below guy had been sitting! And that was all we heard of the conversation. But isn’t that loco?

The evening also involved Phish Food at Ben & Jerry’s. I exchanged my fair share of meal credits for tubs of this stuff as an undergrad. Bahaha. Which was probably why I had to do this after college.

Though I never have partaken (nor had a desire to) in the events of Ann Arbor’s annual Hash Bash, as a college freshman, while visiting me in Ann Arbor, Five Cent Femme and I did walk to the diag on campus to see what the fuss was all about. Looked something like this, back then: 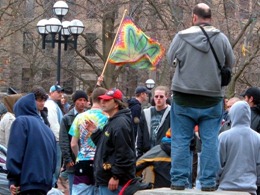 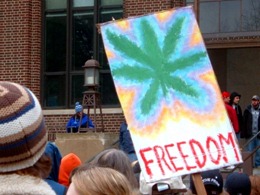 Back tomorrow to tell you about our delicious Easter brunch this morning!

One thought on “Scenes Before Easter”