The Wurst Bar – it is kind of the new place to try in the world of Washtenaw County food. Or maybe not. Maybe just in my head. But I have been hearing lots of buzz about the place.

In any case, Saturday evening after the What’s Cooking Detroit Food & Cooking Expo, I headed to Ypsi with the huz for dinner. (Yes we were quite hungry, even after the samples!). We found street parking right out front, on Cross Street. 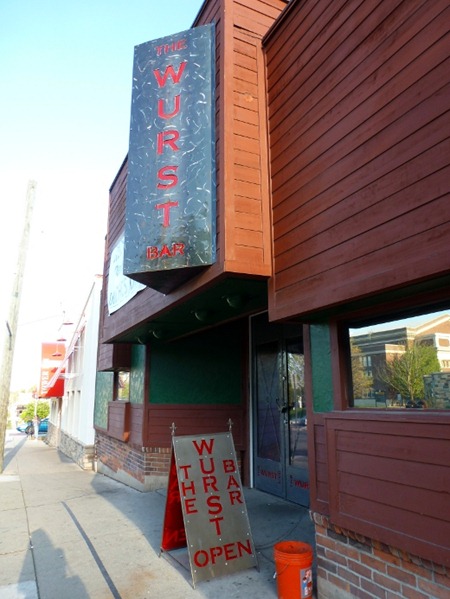 I was going to complain about the lack of signage directing patrons to seat themselves, as we were unsure about what to do when we entered Wurst Bar (and it took a few minutes for a staff member to direct us); however, upon reviewing my photographs, I now see that it IS in fact written upon the chalkboard at the entrance to “Please Seat Yourselves.” Good call – but not the most obvious signage to a newbie. 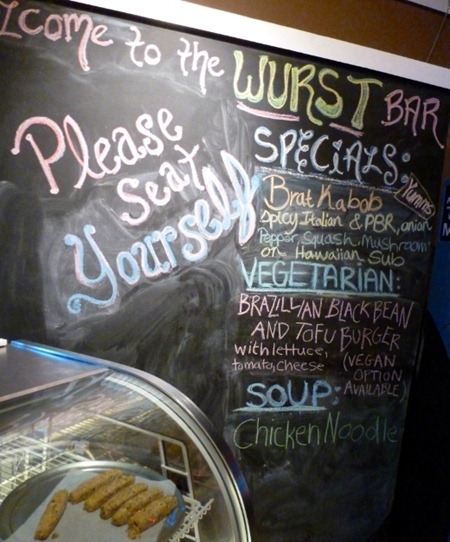 Also near the Wurst Bar entrance – a case of various “wursts” and sausages.

Most of the tables are high-top. The bar is fairly large, and a chalkboard wall behind it lists the frequently rotating taps, most of which are Michigan craft brews (probably 5-6 on draft at a time). There is also a large selection of predominantly Michigan-crafted bottled beer available. And lots of Jameson, if one is so-inclined. Just a few too many TVs for me, however.

There are also a few round black leather booths along the back wall. As you can probably tell, The Wurst Bar’s interior is rather hipster. I have to admit I totally loved the atmosphere and vibe.

After the confusion of whether or not to seat ourselves was resolved, from our small round high top table for two, we ordered our drinks. Of the six or so beers on draft, at least half were IPAs, which aren’t typically my thang. I asked our server about the other drafts (even though he turned around and started shouting to another employee when I was mid-sentence, which kind of took me aback), and I decided to try a sample of New Hollands’s Golden Cap.

After the huz got his beverage and I got my sample, the server checked back in, and then it must have been at least 15 minutes until I finally got my pint of beer. Meanwhile, other patrons had come in and our server was bringing them their drink order first and seemingly blatantly ignoring us. Also meanwhile, there was a group of three female employees (presumably servers) standing in a circle chatting amongst themselves basically the entire time we were at The Wurst Bar, which didn’t impress me at all. In fact, we were getting so irritated with our wait that we were contemplating walking out. However, finally our server returned with my drink and took our order. He did actually apologize as well. Service improved somewhat after that point, but I was never became very impressed with the service throughout the meal.

Luckily, the food was the redeeming factor at The Wurst Bar! The menu is short and sweet – a few, carefully-crafted unique items. One side of the menu features “The Usual” choices, such as Bratwurst, Italian Sausage, or a Beef Burger (prime brisket, short rib, and chuck!), while the other side of the menu features “The Unusual,” ranging from Rabbit, Fig & Viognier Wurst to Spicy Rattlesnake Chorizo to Alligator. There are also interesting vegetarian (and vegan!) options available.

We began our meal with a bowl of pretzel bread nibs with a bold and flavorful Pimento Cheese Dip.

I decided not to get too crazy on our first visit (no rattlesnake this time!) and ordered one of “The Usual” items – PBR Poached Bratwurst, on a pretzel bun, topped with, at my request, Kimchi-Kraut and hot peppers. Several bottles of mustards are available at each table, and I applied a generous dose of Creole Mustard to my brat. To my delight, my brat was just AWESOME! Incredibly rich, flavorful and delicious. And juicy! Mmm, so crave-able.

The Wurst Bar uniquely offers tots, and not fries, which thrilled both the huz and I. We both ordered a side of “mixed” tots, a combination of traditional ‘throwback’ tots and sweet potato tots. Our server offered curried ketchup and marshmallow fluff as dips for our tots. We declined the fluff, but requested the curried ketchup which was, also, AWESOME! 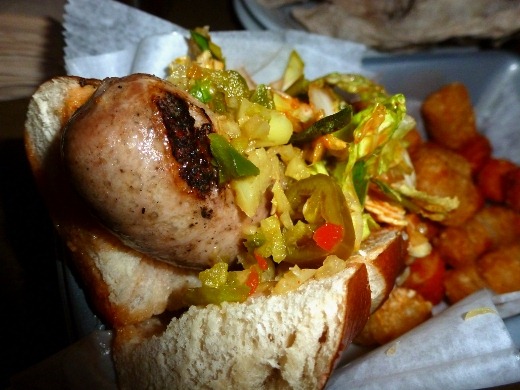 Also, I should mention that The Wurst Bar serves its food in loaf pans. I can’t decide if it’s kitchy or fun. Actually I think it’s fun, I like it. The only downside is that the bread pan doesn’t really offer the best food presentation, as it is somewhat hidden in the pan, but I still like it!

The huz ordered the Mettwurst, which was a beef and pork wurst, seasoned with celery seed and mustard seed, with sauerkraut and hot peppers – and, as mentioned, mixed tots. We both preferred the regular tots over the sweet tots, though the sweet tots were a fun variation on tradition. He was also big fan of the food! 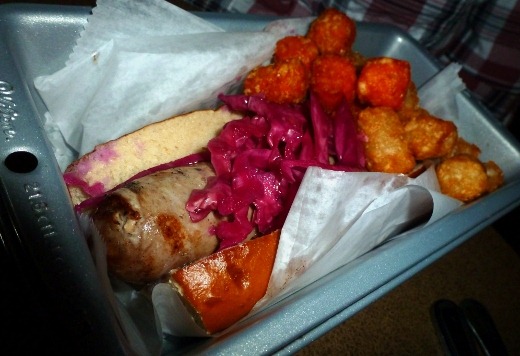 Report Card for our first visit to The Wurst Bar:

I am excited to return. I just hope the service wrinkles are ironed out in the meantime. If that happens, I can see myself coming here frequently. There are several specials offered throughout the week, such as $2 draft beers on Friday after 8PM, and Wednesday night trivia.

Dom’s is located conveniently (dangerously?) nearby, which meant we brought donuts home for dessert. Double chocolate cake donut for moi.

Currently listening to: The Flame – The Black Keys.

This song has such a catchy bluesy riff, all I want to do is dance around my house with an air guitar when I hear it.

14 thoughts on “The Wurst Bar Review”