Today I was lazy in the food department.

For lunch, I found it necessary to brighten up the rather dull work day by going out to lunch. Our first choice was closed for the holiday, so our nearby second choice was Café Marie. I was tempted by all of the offerings featuring smoked salmon, and eventually chose the Smoked Salmon Sandwich on ciabatta bread, with a side of quinoa salad. The sandwich was really delicious, and the bread was yummy, warm, and soft – easily chewy – none of that rough ciabatta that tears up your mouth, you know? The quinoa salad was fine, but rather bland. It needed some fresh herbs and some sort of acidic ingredient, like lemon juice. Plus a pickle!

After trying a bite of my dining companion/co-worker’s dish, the Smoked Salmon Scramble, I had mild food envy because it was superrrr delicious! Rich and savory. Melty cheese. The egg was cooked perfectly too.

The service was satisfactory, but we were sad we weren’t allowed to sit outside because all of the tables were still locked together and not set up, due to a storm several hours earlier in the morning.

For dinner, I felt like a mild celebration was necessary since tomorrow is a holiday and the huz and I have the day off work. The huz and I went downtown (during a brief downpour we had to dodge!) to Sabor Latino to try Taco Tuesday for the first time. We started with complimentary chips and salsa and a round of their yummy frozen lime margs with salt.

And we each ordered three of the $1 tacos: fish, shrimp, and beef for me. I think the beef was my favorite, but it might be a tie between the fish and the beef. These tacos were really rather mediocre I have to say. I mean, yeah, they’re only a buck each so I can’t complain. But they were really were just bland and needed some HEAT, above all, and some flavor. Probably some of the add-able toppings (for a fee) would have helped in that department. Dinner was good though. 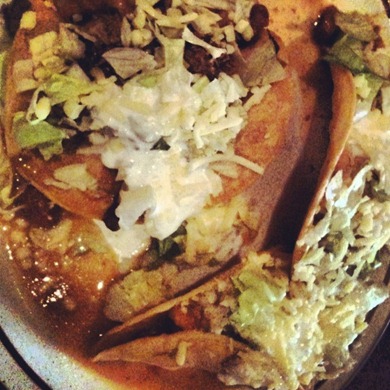 So now I ask myself – what is a better deal? Bar Louie’s $1 Burger Tuesdays or Sabor Latino’s $1 Taco Tuesdays? In terms of flavor the burgers probably win, but in terms of service Sabor Latino wins by a landslide. When I’m not in the mood to deal with Bar Louie’s craptastic service, I’ll probably return to Sabor Latino for tacos instead.

After dinner we saw the movie Ted at the theater. It was pretty funny. It was entertaining but I wouldn’t rave about it. I’d rate it about a 7/10, relative to comedies.