Mostly out of indecision, I somehow ended up at Arbor Brewing Company for dinner on Friday. Unfortunately, I think we visited on an “off day.”

We had about a 15 minute wait to be seated. To drink, I ordered the Bavarian Bliss Hefeweizen. This was my favorite Oktoberfest beer last autumn. I feel like ABC’s food is usually pretty solid, but tonight it was just subpar. I ordered the Drunken Chicken Sandwich, which is an IPA-marinated free-range chicken breast (see – this is why I like ABC: homemade, quality products) on a sesame bun with basil pesto, red onion, spinach, and goat cheese. However, I couldn’t find the goat cheese on my sandwich? The bun was also dry, while the chicken was bland. A disappointing sandwich. I had a side of broccoli with my sandwich, in place of fries, which was good.

The huz had the BBQ Pulled Pork Sandwich which was simply alright, with a side of onion rings. The onion rings cost $2 extra but he received literally THREE onion rings (albeit, they were giant ones). What the…?

Another weird thing that happened… After we ordered our food, I took about one sip of my beer, and literally like three minutes later our food was brought out. Whaaa? I appreciate fast service, but it makes me wonder. ABC did not bring their A-game Friday night.

To make up for our decidedly mediocre dinner, we went all out at the new Grand Traverse Pie Company location on Liberty Street. The huz and I each had our own piece of a berry crumb pie à la mode.

The pie was served warm and it was nothing short of AMAZING.

Eventually we ended up back at home for the evening and played a twilight game of Skip Bo outdoors on the deck (with a wine bottle in tote.) 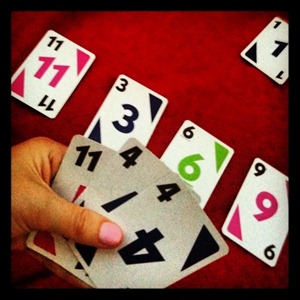 2 thoughts on “Off Day at ABC”