In my last Europe trip post, I told you about the first half of our Best of Tuscany day tour in Italy. Our first two stops of the day were a visit to Siena, followed by lunch and wine tasting at an organic Tuscan winery.

During the second half of the day we visited San Gimignano, followed by a visit to Pisa.

First I’ll tell you about our time in San Gimignano. Here, we were given a map, a little background information on the town, and set free to explore for 90 minutes. The huz and I headed San Gimignano’s Piazza della Cisterna for gelato. Not just any gelato, but gelato from Gelateria di Piazza, a two time world champion over the past five years.

The line was long but super fast! There were all sorts of creative and surprising flavors, so I just had to get the interesting ones! I tried a trio:

Pure awesomeness. There was so much rosemary gelato in my dish though – by the end it was getting a little too intense for me! Now that I write this, having been home a few weeks, I STILL can’t smell or taste rosemary without being reminded of this gelato. I find myself reaching for thyme instead of rosemary while cooking. Not yet sure if that is a good or bad thing!

We sat in the piazza, eating our gelato for a few minutes before taking a stroll through the small town. Gelato with a view!

Wandering the streets of San Gimignano: 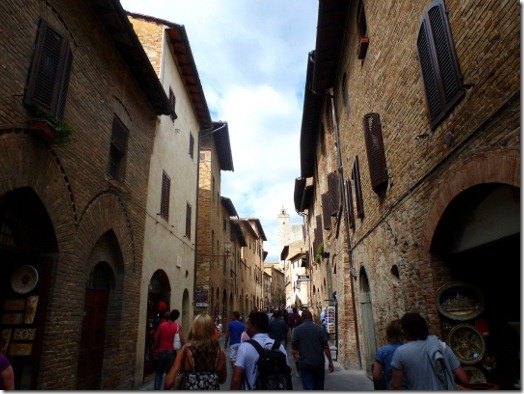 According to my Frommer’s guide, San Gimignano is Tuscany’s best preserved medieval town. 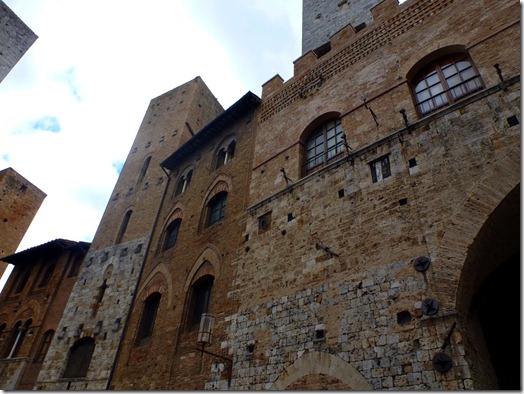 We walked over to a park in town and up these stairs.

At the top of the stairs, we were treated to a view of San Gimignano and the Tuscan hillside.

Also a close-up view of the medieval towers. 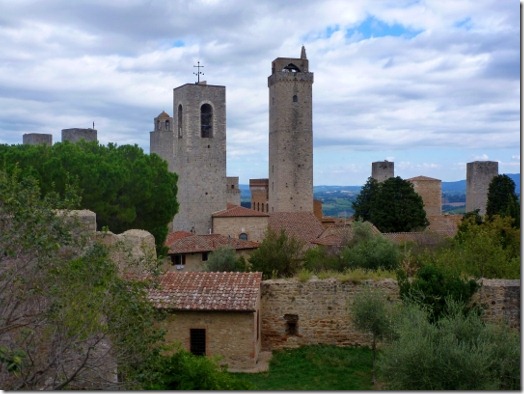 Zooming in for creeper mode: 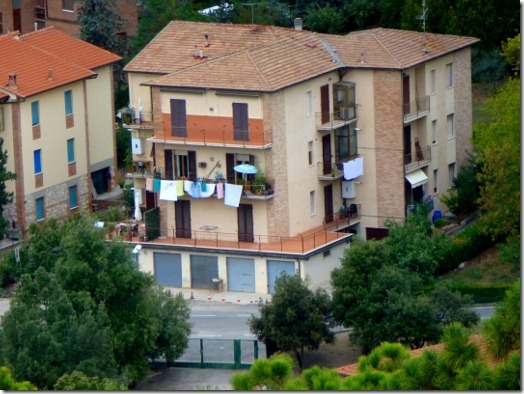 Can’t get enough of that view! Italy, you are GORGEOUS! 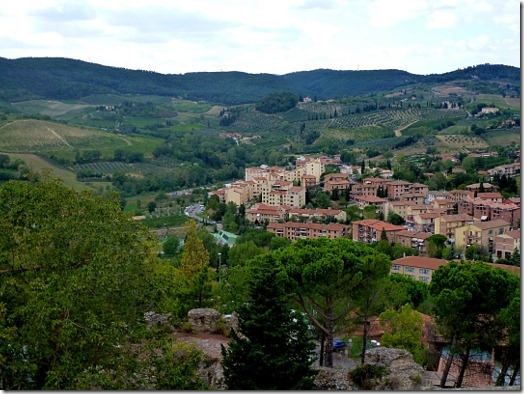 Then back down the stairs:

I was a little bummed that I had to spend at least 15 minutes of our time in San Gimignano in line to pay to use the public bathrooms. I really wish our tour bus had a restroom. The epitome of class: 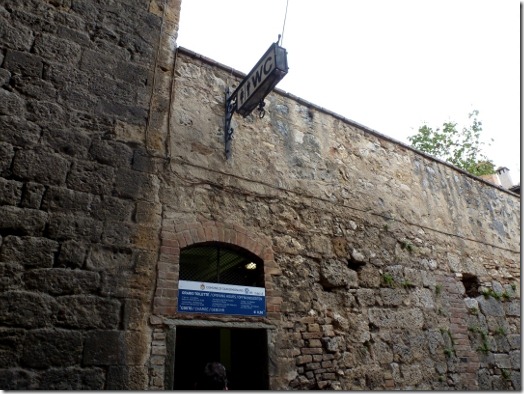 If we’d had more time, for the sake of novelty, I would have liked to check out one of the multiple “torture museums” in San Gimignano. Odd.. 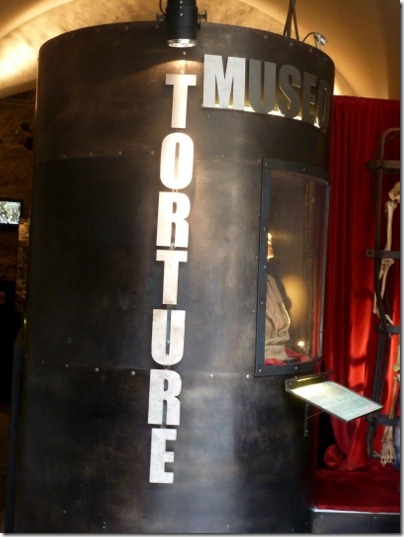 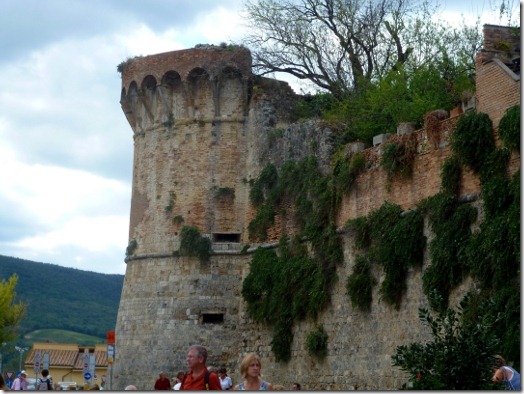 After 90 minutes of exploring San Gimignano, we headed back to meet our tour group.

Then it was time for another drive through the Tuscan hills. 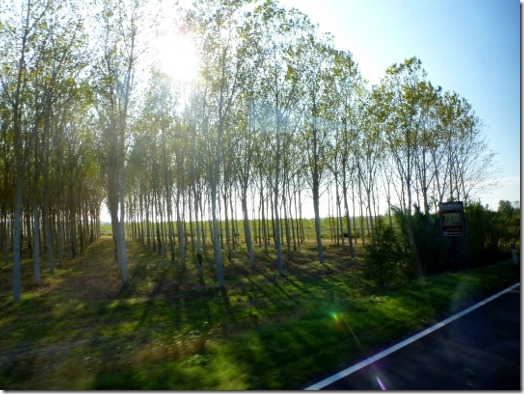 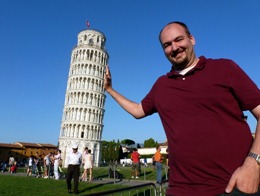 Did you know that it is actually illegal to step on the grass in front of the Leaning Tower? It is roped off. I am a rebel. 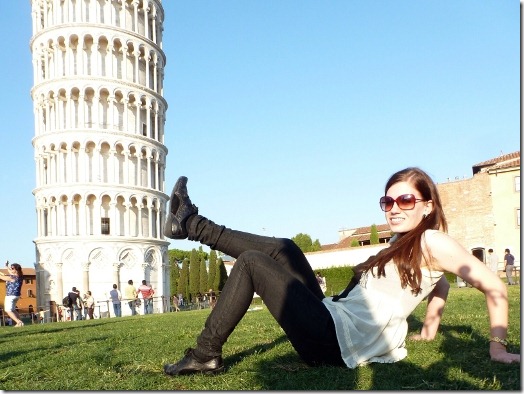 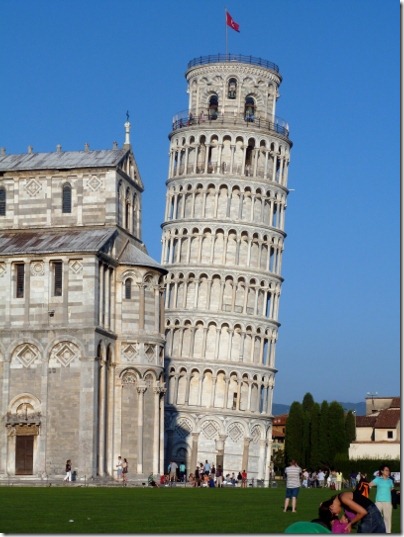 We actually didn’t do a whole lot in Pisa, other than hanging out in the Piazza dei Miracoli, the Field of Miracles, which houses the Leaning Tower of Pisa, cathedral, baptistry, and bell tower.

We did tour the interior of the cathedral across from the Leaning Tower: 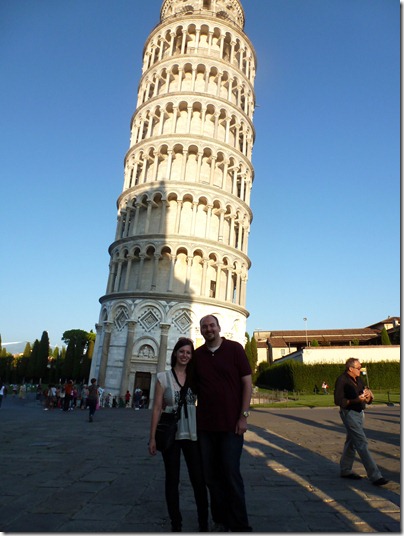 We also went on a narrated trolley tour around Pisa.

And that was the end of our Tuscany Day Tour! What a day!

After riding back to Florence, we were wiped out and got pizza take-out to eat in our hotel room.

And a couple cannolis!

The day after our Tuscany Tour was our most strenuous of our entire trip, hence the quick and easy dinner the night before, allowing us to hit the hay and be rested for our next big day!