It seems as though I have been riddled with bad luck this weekend. And for just, well, the last week.

“The man who said ‘I’d rather be lucky than good’ saw deeply into life. People are afraid to face how great a part of life is dependent on luck. It’s scary to think so much is out of one’s control. There are moments in a match when the ball hits the top of the net, and for a split second, it can either go forward or fall back. With a little luck, it goes forward, and you win. Or maybe it doesn’t, and you lose.” – from the movie Match Point

Yes, bad luck. I’m not one of those people who believe in fate, destiny, or karma. I believe in chance and coincidence. I don’t believe that “if it’s meant to be, it will happen.” I think it will happen if you MAKE it happen. And a touch of good luck can’t hurt.

Yes, so, just a little bad luck. Nothing major, just lots of little things that pile up and make me feel grumpy. But nothing I can’t overcome.

At risk of turning this blog into a whiny journal – no one likes to read negative, complaint-ridden blogs – I’ll tell you about it. Because my recent blog traffic stats seem to suggest that the vast majority of people even reading this thing are people doing Google searches for “30 day shred results,” anyways. Well, that, and “Flint Michigan Ghetto” searches have also drawn in several readers recently. Hmm.

Plus, I like writing. Find it cathartic. So let’s go there. You game?

So, my abdomen has been aching after I eat every time for the last three days. Yeah, I know. Wah wah. But I can’t figure it out. No matter how big or small the meal, lean or indulgent, dairy or no dairy, wheat or no wheat, doesn’t matter. My stomach just feels inflamed and I feel somewhat sick after eating. So I spent a decent chunk of Saturday and of Sunday writhing around my couch. Yucky.

Luckily, this seems to be the meal that my digestive system liked, because after dinner tonight I feel much better. Salmon, kale chips, and a brown rice and whole grain blend.

On Saturday, Five Cent Femme and I attempted to visit the new Panda Express at Briarwood Mall. Panda Express used to be one of our our favorite places when we were in high school and would go shopping at Genesee Valley Mall in Flint and dine in the food court. (Maybe I should insert the phrase “Flint Michigan Ghetto” here to boost traffic?) Pretty sure that (high school) is the last time I’ve been to a Panda Express. And I’ve been craving it as a guilty pleasure ever since.

That Lo Mein is Off The Chain. (Yay rhymes!)

But, sadly, we weren’t the only ones with the idea to eat at Panda Express this weekend because the place was packed so it didn’t pan out.

Ah well, there are certainly much, much, much worse things that could happen in life. But this is My Pity Party Post, so I’m going to tell you about it anyways. Because I wouldn’t be surprised if I’ve I lost the vast majority of my audience by this point in the post anyways.

Today I prepared dinner for Monday evening, so I can just come home and heat-and-eat chili tomorrow, with minimal effort. While chopping two poblano peppers, the entire time I was afraid that I was going to spray poblano pepper juice in my eye. But, it never happened.

Ironically enough, an hour later, while preparing tonight’s actual dinner, Blackened Salmon, the butter and oil mixture spattered out of my skillet and directly into my EYEBALL.

Waterworks ensued. I ran up the stairs to take out my contacts and rinse out my eyeball and tripped in the process. More waterworks. What a drama queen.

I’d like to think my contacts saved my eyeball a bit, but really if I we were wearing my glasses that would have really saved it. Ouchies. My eyeball burned for about an hour after that. No good. Weirdly enough, Five Cent Femme and I were talking about getting pepper spray in your eyes just yesterday.

Speaking of “waterworks,” I had another case of waterworks a few days ago. I saw this picture over at OhSheGlows and could not stop “AWW”-ing. (I have this minor obsession with pictures of cuddling animals). 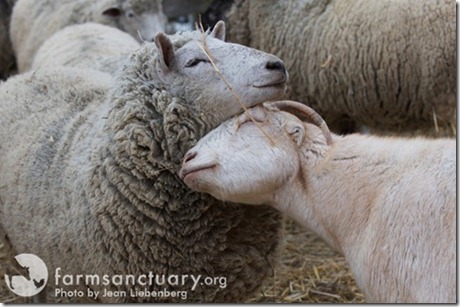 Later in the evening, at home, I clicked on the picture again. Navigated over to the Farmsanctuary.org website, from which the picture originates, and started watching some of the videos on the site describing the horrendous living conditions of livestock in this country and it just made me cry. On the bright side, Farm Sanctuary sounds like an amazing organization supporting animal welfare. (As suggested by OhSheGlows, a donation in a friend’s or family member’s name to a Farm Sanctuary such as this one could make a nice holiday gift for the right person!).

Then later tonight I was shaving my legs and just cut the HELL out of my ankle with a razor blade. It didn’t even hurt all that much, there was just a really vast amount of blood that alarmed me and made me feel all panicky. You know, like that feeling you get when you go to WebMD and search for “twitching eyeball” and then find you must have a brain tumor? That zOMG feeling.

But it was fine. So yes. If this was my weekend, it should be interesting to see what the work week has in store. I’m not going to write about work in my public blog, but as I’ve recently alluded, work has been frustrating lately.

Yes, so these are my White Girl Problems/First World Problems of the week!

I’ll end on a positive note by link you to this sweet jam by Imagine Dragons that I have been totally digging lately.