Hey friends! I’m so excited to tell you about my participation in this year’s Artini!

Artini is an annual event organized by, and fundraiser for, the Ann Arbor Art Center, at which participants engage in a Martini Crawl around downtown Ann Arbor. I also attended Artini Martini Crawl 2012, last year!

This year there were even more participating locations, for a total of TEN, all located within walking, or, well, crawling distance of each other. Each participant received six tickets to use at his or her discretion over the course of the evening. Participating locations for Artini 2013 included:

Here’s a sneak peak at all of the fun martinis I tried throughout the night. And don’t worry – most are only in the three ounce range, so they’re really only about half of the size of a traditional martini! 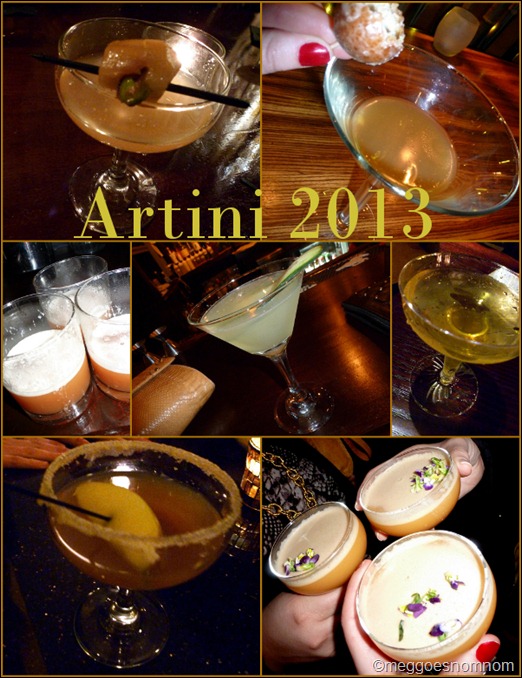 Before the event, my two friends and I had a Whole Foods hot bar dinner, consumed at the bar with a glass of vino. I loaded up on a few heavy dishes, like BBQ pulled pork and mac ‘n’ cheese, to provide sustenance for the night to come! 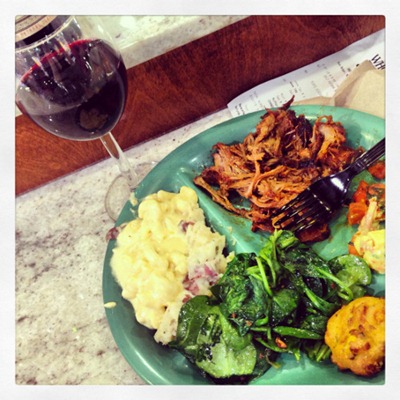 After dinner, we made ourselves look sexy, and snagged a pre-Artini photo at my house before our big night. Me, Five Star SexiMexy, and Five Cent Femme!

Like responsible adults, we cabbed it downtown to the Art Center to pick up our tickets. Each attendee receives six drink tickets, plus some other swag, like Kind bars and Pearl Vodka lanyards. Booyah! Pearl Vodka is the sponsor of the event and provided the vodka for all of the martinis we enjoyed throughout the night.

Our first stop was The Last Word, which was the bar that we were all most looking forward to visiting – me, because it was my first time here, and I’ve been anxious to check it out.

And what can I say? I loved it here. Just straight up class, with a menu chock full of interesting craft cocktails. I would deduct maybe 1/2 of a point for the odd music that was playing during our visit, however – but hey, it kept me on my toes, wondering what wonky song might come on next.

Upon entering The Last Word, we made our way to the back corner of the warm, inviting, and dimly lit space, where we received a very friendly greeting and enthusiastic description of their martini, titled ‘The Understudy,’ consisting of Pearl vodka infused with pineapple, gin, cucumber, jalapeño, and ginger beer. We all loved the sophisticated flavors in this cocktail, especially the jalapeño that lended a unique spiciness, yet only a mild heat to the drink. Fabulous. Can’t wait to go back.

Vinology was our second stop. I was looking forward to hanging out in the basement bubble room again, and also remembered that last year they were the only location to feature a light appetizer – which was also true this year!

By the time we reached Vinology, the bar crowds were building, so we waited patiently to get to the front of the bar line too receive our cocktail, called the Pear-Stachio (love the little ‘stache graphic on their informational card pictured below!).

As indicated, the Pear-Stachio consisted of “Pear-infused Pearl Vodka, Housemade Pear & Ginger Shrub, Dumante Pistachio Liqueur, Garnished with a pistachio stuffed pear ‘olive.’” I appreciate the unique flavor profile of this martini, but it was a tad too cloying to my taste buds.

I must comment, though, that I loved the fact that Pistachio Liqueur was used in this libation. I’d never heard of this spirit before (see a picture of the large, handsome square-ish bottle above) – definitely an unusual ingredient. I actually started doing a little research on the Pistachio Liqueur, following my intrigue, and discovered it is imported from Italy.

In my search, I also found another interesting article about drinks with unusual ingredients, such as a Pickleback! This isn’t the first time I’ve heard of a Pickleback, but I’ve never had the opportunity to try one myself. Basically it’s a shot of whiskey followed by a shot of pickle brine. PICKLE BRINE! Snooki would be proud! Now if that’s not a unique cocktail ingredient, I don’t know what is. Gotta try one of those.

In any case, we wrapped up our visit to Vinology with a pear- and stilton-filled pasty. 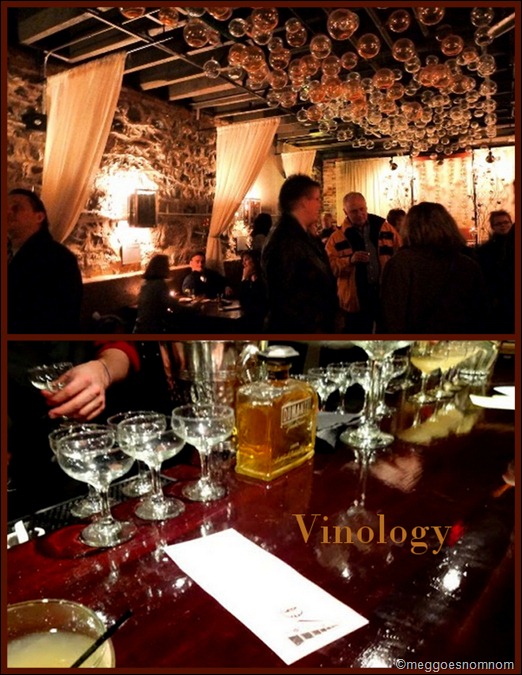 Our third stop was Habana. I have to admit I’ve been less-than-impressed with Habana during my previous visits. It is ridiculously, unpleasantly dark in the back area, and when the DJ is playing, there are these crazy seizure-inducing laser lights strobing. It’s pretty much just not my scene, at all.

Habana’s Artini presentation was unfortunately a bit on the tacky side, with our martini being served in freshly-washed-but-still-visibly-wet plastic, reusable cups. From what I recall, this drink was made of Pearl Vodka infused with cara cara oranges, saffron, and cava, and was my least favorite of the night.

But, we still had fun taking mischievous bedroom-eyes photos (outtakes not posted!) while we sipped our dranks.

Mash has been one of my favorite new watering hole discoveries as of late (see here and here), consistent with my recent interest in bourbon and rye whiskeys. My past visits have been really great, with tasty drinks and good service provided by well-informed staff. However, the night of Artini it was just absolutely crazy in there; wall-to-wall people, which meant that our service was very, verrrry slow. We waited approximately 15 minutes for our martini, after making our way to the front of the line and handing our tickets to a server.

The drink served at mash was one of the cocktails from their regular menu, featuring whiskey and pineapple, among other ingredients. While I am a fan of this cocktail usually (it was extra sweet –too much – this particular evening, however), I would have liked to have seen something more unique for the event.

Another location on our must-hit list was Black Pearl. I appreciated that at Black Pearl, despite the wait to get our martini, the gentleman hosting the Artini guests in the entrance gave a friendly welcome to everyone entering, and kept us posted that there would be a little wait, but still kept the crowd’s spirits up by joining in on a Happy Birthday chorus for one of the Artini guests. Here we felt welcome, and not like a second-rate guest. (Even though we couldn’t sit at the dining tables.. which is certainly fair! We found space around the bar to sip our cocktails.)

Black Pearl’s featured cocktail tasted just like biting into a juicy red delicious apple. I loved it! There was also a hit of caramel, and a cinnamon-sugar rim. The fresh, authentic apple flavor really sang to me, and the drink was not overly sweet, in my opinion.

The only warm libation of the evening was served at Mélange, with their Warm Apple Pie Martini. I thought it was cute and seasonally-appropriate to serve a warm beverage at the event, and also loved the adorable glazed donut hole accompaniment. This beverage was rather sweeter than I might prefer, and the flavor reminded me of a green apple liqueur (of which I’m not a huge fan) mixed with cider. Our timing wasn’t great, since coming to Mélange after Black Pearl meant we had two apple drinks in a row, which in turn meant that, of course, I couldn’t help but compare the drinks to each other, with Black Pearl’s apple martini coming out on top.

Our bonus round was at The Ravens Club, because at a couple of the locations only one or two of our group of three used a ticket, which meant in the end we had enough tickets for a final round at Ravens Club. I’m so glad that we were able to try Ravens Club, because they had my second favorite martini of the evening.

Edible violet flowers made for a delicate, artful garnish on this complex cocktail featuring ginger, chestnut, coconut, and bitters. The cocktail had a creamy consistency and mouth feel without a cloying sweetness. So lovely! I think Ravens Club really captured the spirit of Artini: to create a unique and drinkable piece of artwork!

Okay, this doesn’t really count as one of our Artini stops, because we didn’t visit Rush during the event, from 7:00-10:00 PM, but instead we visited afterward, to enjoy some music and get our dancing groove on. I mean, it’s girls’ night! Girls gotta dance.

I had a really awesome peach old fashioned at Rush that I loved. Must recreate.

As the evening progressed, things got a little grizzlay. 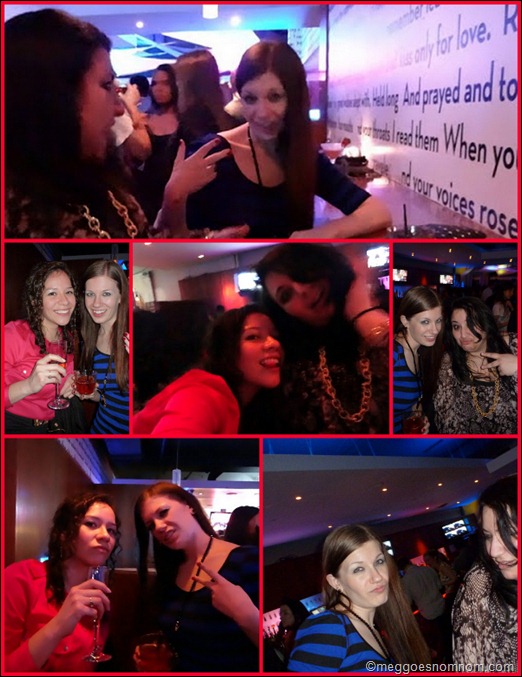 In the end, Five Star and I basically dominated this pizza, with a little help from the huz back home. Why does pizza taste so amazing in the wee hours of the morning? EXTRA CHEESE was a great post-Artini life decision.

Eventually, we remembered to cast our votes for best martini of the night, via text message. I voted for The Last Word, and Five Star voted for Ravens Club, but alas, at 3:27 AM, the poll had closed hours earlier and we received a text reply stating so! Lame!

In any case, as announced on Facebook, the winner of Artini 2013 was The Last Word’s martini “The Understudy.”

Hope you enjoyed my recap! I definitely recommend the event if you’re able to check it out in 2014 – I hope to do so!