This past Sunday I was making the one hour drive from my parents’ house to my house, sunroof down, sporting my sunglasses, relishing the mild weather, and decided that I would go running when I arrived back in Ann Arbor.

I also decided, during my drive, that I would start the Couch to 5K program over again this year. I followed this program in the spring of 2011 and was absolutely thrilled by the results. I went from being an absolute NON-runner my entire life, to running my first 5K race after nine weeks of training. Those are REAL results, people. Seriously, if I can do this, anyone can.

Because of my mildly obsessive-compulsive tendencies, I did track my progress and still have a copy of it I thought I might share.

Basically, the Couch to 5K Running Plan is a nine week program, during which trainees complete three runs per week, per the schedule. The days I ran are shown in the green font above, with an alphanumeric acronym indicating which day of the plan I completed (i.e., W4D2 = week 4, day 2).

Week 1’s prescription is as follows: “Brisk five-minute warm-up walk. Then alternate 60 seconds of jogging and 90 seconds of walking for a total of 20 minutes.”

Over the course of nine weeks, the running intervals are lengthened while the walking intervals are slowly reduced and eventually eliminated, until the trainee has built up the endurance to complete a 5K, which is 3.1 miles. I usually ran more than three times per week, however, and just repeated workouts from that week’s plan. Also included above are the extra workouts I completed during the Couch to 5K program, which are Jillian Michaels’ DVD workouts (in pale pink).

In 2011, after nine weeks of training I ran the Dexter-Ann Arbor Run 5K. I continued to run that entire summer, and later that year I also ran in the Big House Big Heart 5K (which, sadly, has been discontinued! I’m still bummed about this). Eventually I did work up to running a few 5-milers that summer, which would still be my longest runs to date. 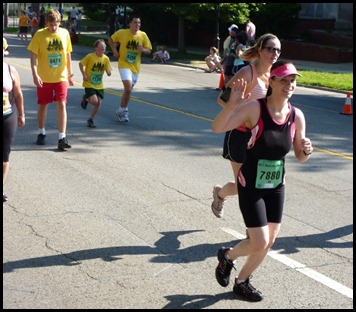 Then, last year in 2012, I ran somewhat frequently throughout the spring, summer, and fall, but I wasn’t as committed as I was the prior year.

Where I am going with all this?

So, where that puts me today is back at W1D2 of C25K (Week 1, Day 2 of Couch to 5K, for you newbies), after not running for the last five months (though I’ve been working out with Jillian’s DVDs, indoors, of course!).

On Sunday I ran Week 1, Day 1, and as expected it was rather easy for me. My hope was to ease back into the activity. But phew, for as easy as the run felt, I sure was sore for the two days following my run! Holy hip stiffness and shin splints!

Two days later, today, I performed the same Week 1 run, except this time, I ran with leg stiffness in weather that was 20 degrees colder with some crazy rain/slow mix pelting down on me. I’m not complaining, but merely commenting on how I was feeling during the run – I don’t know about you, but there’s always some serious rumination taking place when I run. All I could think of while running was how nice my next run will have to feel compared to this not-so-pleasant one. I was definitely doubting myself and my commitment to this plan during the run, which spurred me to write this post and think more about it. Putting things in writing always helps me think things through.

Another tidbit I will mention is that I love running with my Garmin 305; having this GPS receiver watch highly enhances my running experience.

I’ll keep you posted on my running goals and racing plans! I hope to sign up for a 5K soon!