This past Friday a large crowd of people from my office went to Vellum for Happy Hour. This was my first visit to Vellum!

Our party indulged in libations in the lounge area, a space filled with natural light courtesy of the large Main Street-facing windows. Two-story high ceilings covered the lounge, affording a view of the upper level of the restaurant, with exposed brick walls and rich wood paneling throughout the restaurant. 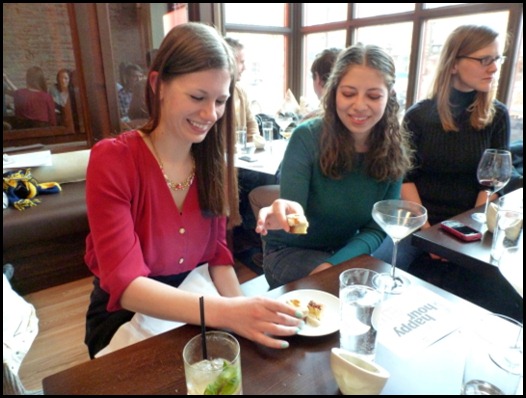 Vellum’s Happy Hour runs weekdays from 5:00 – 7:00 PM and features plenty of great deals, including $3 draft beers and shots, and $5 cocktails and glasses of wine. There are several nibble-worthy appetizers on special for less than five dollars each, also.

I ordered one of the Happy Hour cocktails, called Ward 8, featuring bourbon and lemon – fantastic! Typically I like to try different drinks over the course of an evening, but this was so good that I just had to order a second.

At one point in the evening, Gabi and I decided that we must try the “Marrow on Toast” appetizer.

This is my skeptical face. The marrow barely phased Gabi, but of course I had to be a little bit of a drama queen about it.

I was pretty neutral about the flavor of the marrow. We kind of collectively decided it tasted like cheese and gravy. The gelatinous texture was rather unappealing to me, but I ate my half like a champ.

A member of of our party treated us all to a round of shots. Clearly our office doesn’t play around during Happy Hour. Serious biznass.

The only photographic evidence of Five Star SexiMexy’s attendance is this picture of a red lipstick-kissed wine glass.

Then we headed to Mani Osteria for our 8:00 PM dinner reservation.

I totally forgot the name of the cocktail I ordered at Mani (..”The Un-_[something]__”), featuring Bulleit Rye Whiskey, rosemary, walnut bitters, lemon, and several other ingredients, but it was rather complex and tasty.

A couple orders of pork belly were ordered, following by one shitton of pizzas. And by shitton, I mean maybe eight or so?

I actually managed to try five of them. I know, I am a food monster.

So, I ordered and shared the Polpette, which was my favorite of them all! The Polpette features the most incredible savory meatlballs, along with fresh ricotta, mint, and pickled chile.

YESSSSSSSSSSS. How much are you swooning right now???

We had at least a trio of the Tartufo pizzas at our table as well, topped with fontina, black, truffles, and egg. Awesome.

I also tried slices of these pies:

All were just wonderful. Mani truly has incredible cuisine. They totally deserve the hype. (Such as making Travel & Leisure’s Top 20 List of the Best Italian Restaurants in the country.)

I also made it into Alley Bar for this darjeeling tea-infused cocktail with blueberry and lemon. (Though I slightly regret not ordering a pickle back.) This was a tasty dessert cocktail. 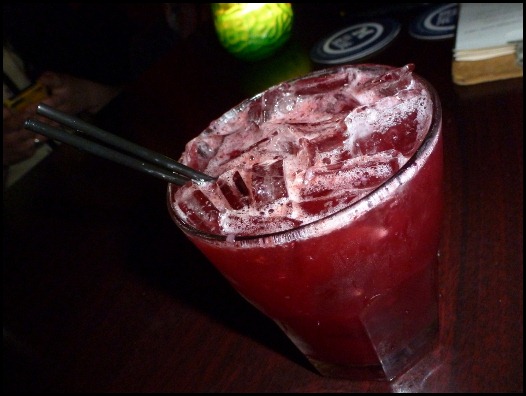 After a rather “lush-y” week, this upcoming week I most definitely plan to return to my more sensible eating habits!

5 thoughts on “Vellum Happy Hour and Dinner at Mani Osteria”