Every once in a while, maybe once a month or so, I cook something that is so delicious that it makes me declare, “I would serve this at my restaurant.” Now, I definitely do not own a restaurant, nor have plans to open one. But, I probably should own a restaurant, because I’m pretty sure I’d have a pretty amazing repertoire of dishes to serve by now.

The patty melts we made for dinner tonight would most definitely be on the menu. And the oven fries would definitely be a standard side item too, but the logistics of serving them might be a tad tricky, since they take thirty minutes to bake. I guess that’s why I don’t own a restaurant.

Well, so, yeah.. speaking of careers. This last week was actually kind of a big deal for me. Well, firstly it was a roller coaster of emotions. Ups, downs, anxiety, uncertainly, and then finally, an excellent resolution. I was offered a very nice promotion at work, I am happy to announce! I rarely talk about my job on the blog, because one of my primary purposes in writing this blog is to escape from the daily mundane and relish in the world of delicious food. Not that every day is mundane, but, you know. I actually have a job that I wake up and don’t mind going to each day, so I think that’s a pretty nice win right there. For those of you who are unaware and curious, I am a clinical research coordinator.

When I’m not coordinating research studies, I’m often at home working on my non-existent restaurant menu, apparently. Since this weekend is a three-day holiday weekend,  I wanted to cook at least one ‘special,’ indulgent meal. And this was it.

And melted some butter. Only real butter would do, for this meal. I used a mixture of half olive oil and half butter to caramelize my onion. 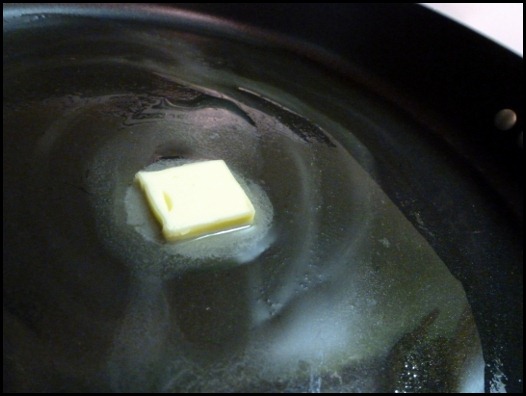 Plop the onions into the heated skillet.

I added a sprinkling of salt at this point.

Twenty minutes (and a splash of water, and lots of stirring!) later…

And, forty minutes later… caramelized onions! I think these were the best ones I’ve ever made.

Meanwhile, while my onions were caramelizing on the stovetop, I got to work on my side dish. I found this recipe for Crispy Rosemary Baked Fries originally on Pinterest, and the recipe and method can be found over at Running to the Kitchen.

The first step was to slice russet potatoes into fry-shaped pieces and soak in hot water for ten minutes. I sliced mine into long, roughly 3/8” thick slices. 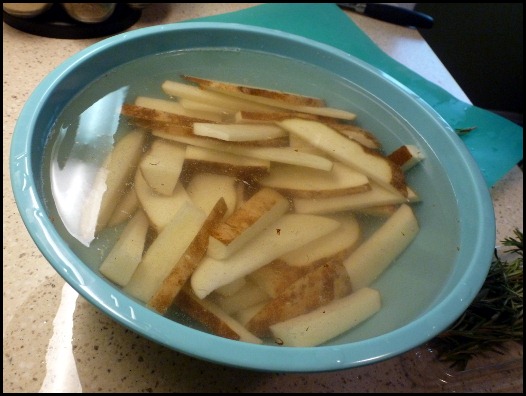 While the ‘tatos soaked, I chopped fresh rosemary and my kitchen smelled a-may-ing.

After ten minutes of soaking in hot water, I patted the potatoes dry, tossed in olive oil, and seasoned with lots of fresh rosemary, salt, pepper, cumin, smoked paprika, and cayenne pepper.

To cook the fries, I roughly followed Running to the Kitchen’s method, and spread the potatoes on an oiled sheet of parchment paper atop a baking sheet, covered with foil, baked for 5 minutes, uncovered, and baked for another twenty-five or thirty minutes or so, flipping halfway through the baking time (the fries, that is, not my body). I actually baked my fries at a slightly lower temperature than called for by the original recipe (425 F vs 475 F), so mine took an extra 5-10 minutes.

Once you pull these bad boys outta the oven, sprinkle with a touch more salt and fresh rosemary. YUMZ. These were just as amazing as they appear! Wonderful method and recipe.

While I was working on the onions and potatoes indoors, the huz got to work on the burgas!

He grilled four beef quarter pounders on the charcoal grill, and added slices of Swiss cheese during the last few minutes. 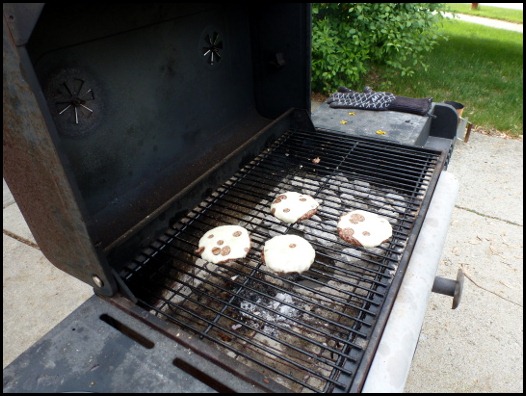 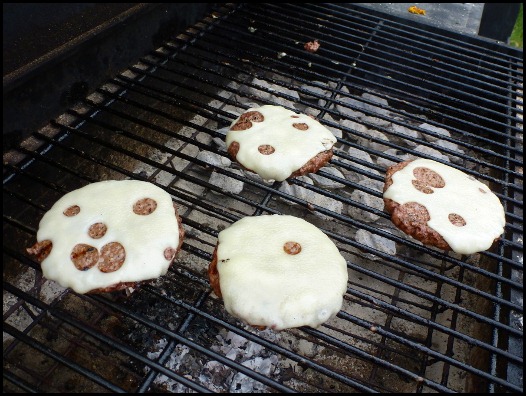 In anticipation of the incoming burgers, I prepared the bread indoors. I browned slices of seeded rye (my favorite bread ever) in a skillet with melted butter. Oh yes.

I should also mention that the inspiration for these Patty Melts came from a recipe in our new, aptly-named “Grill Master” cookbook by Williams-Sonoma, which we were gifted by one of the huz’s friends who won the book in a giveaway. We love grilling and there are tons of recipes in here that sound amazing and I can’t want to try this summer. 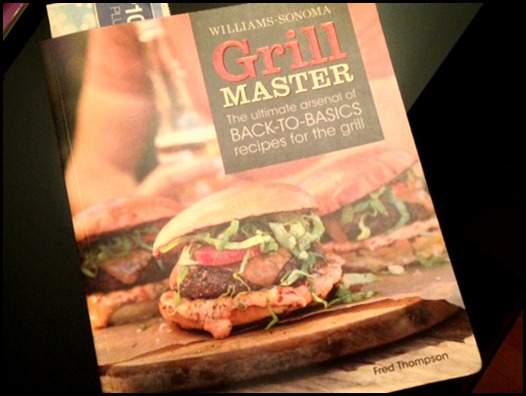 So back to that bread, in my tiny, but loved, kitchen.

The huz brought these bad boys inside and I almost cried, because, I mean, look at them.

I placed a little mayo on the bottom layer of these Patty Melts, because why the hell not?

Oh, and then layer on those succulent caramelized onions, and, for me, sliced green olives, because that’s how I roll. If you’re not swooning at this point, honestly I’m a little worried.

Then you best load up your plate with some of those crispy rosemary oven fries. It’s a party. On your plate.

And there you have it, the MegGoesNomNom Patty Melt, with a side of Crispy Rosemary Oven Fries, coming to my non-existent restaurant soon.

This plate earns ten stars out of ten!