Well, I didn’t depart from the sangria on Friday night. Trust me, I ordered a voluminous mason jar of it. But why, oh why, do I ever order food at Dominick’s? It is relentlessly borderline mediocre/bad. The one exception, as I alluded early, is the pizza. The pizza is quite decent. It’s delicious, actually, when it’s hot and fresh, smothered in pepperoni. But everything else? Just, no. I can’t even.

So on Friday night, I ordered this pulled pork quesadilla to share, as an appetizer and of course, it was rather blah. When you think pulled pork, don’t you think of BBQ sauce? Yeah, well, I do. And there was no BBQ sauce here. It was just weird.

I am happy to report the sangria was of course excellent. This batch was maybe just a tad sweet. Still, I forgive Dominick’s because you’re always there for the atmosphere and sangria anyways. 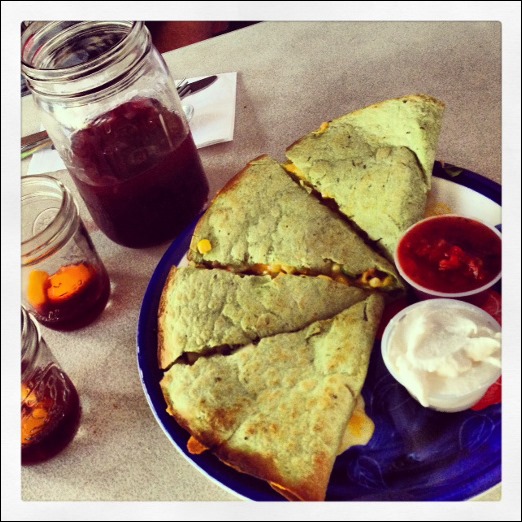 So after that, I ended up at Mélange. Maybe “ended up” isn’t the right phrase, because “ending up” there was pretty deliberate, as I had a dinner reservation! 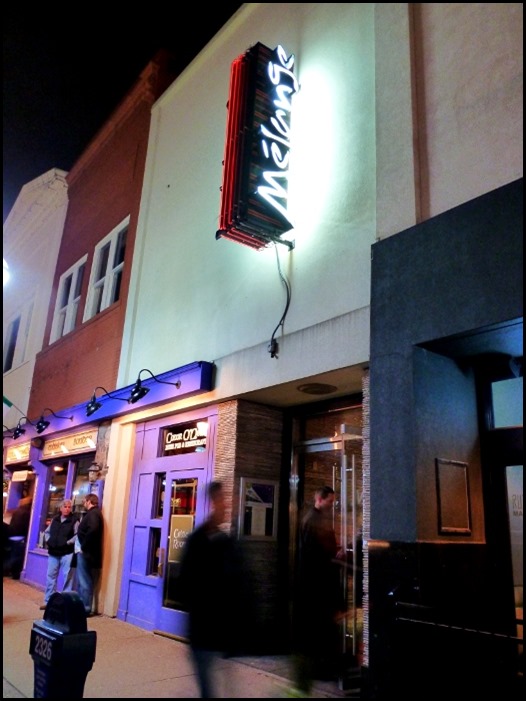 To enter, walk down the stairs from the entrance on Main Street. 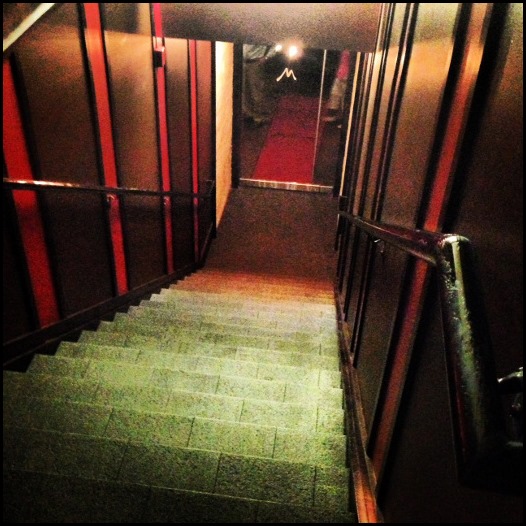 It’s been a solid year and a half since I last had dinner at Mélange, which is why I thought I would write up a second review. Typically, most of my trips to Mélange are either for their awesome 4-6pm Happy Hours deals on Monday-Friday or else for post-11PM bar life on the weekends [like last weekend!].

Predictably, I had a Groupon! So we went for dinner.

When asked what appetizer we would like, I said that we would decline, since we’d already had an app earlier in the evening (that Dominick’s quesadilla!). Our server acted non-jokingly annoyed/disappointed, which sort of made me uncomfortable. Just let me order what food that I want.

We were brought a cucumber gazpacho amuse-bouche to start. 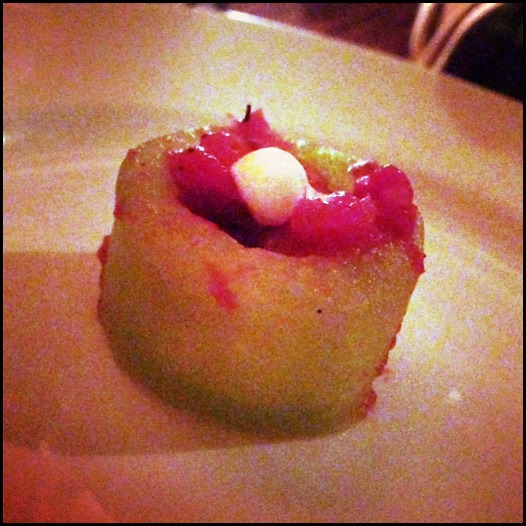 We were also brought a basket of crusty white bread. Accompanying the bread was a tasty spread, but it stumped me! It didn’t taste like butter. It was somewhat mustardy, with a ranch dressing-like consistency, and it reminded me of the spreads that we received with our breads in Prague at many restaurants and never quite determined their contents either. Hmm.

I asked our server for a wine-by-the-glass recommendation to accompany the Barramundi entrée that I planned to order, he seemed a bit stumped and thrown off by the question, but eventually concluded that from the list of reds, his recommendations were a zinfandel or a pinot noir, due to the peppery notes that would accompany the jalapeno in the fish entree. I went with the latter. Not sure if it was the best pairing, but the wine (from Meiomi-Belle Glos) was really good.

As I was enjoying my last bites of bread, I was brought my entrée quite soon after ordering, and had to push my amuse-bouche and bread plates out of the way to make room.

The fish was very delicious, with the highlight being the pan-seared, delightfully crisp exterior. Inside, the fish was tender and flaky. Smoked jalapeño sea salt and paprika dusted the outside of the filet – I would have enjoyed even more of these seasonings, though I appreciate the desire to not overwhelm the delicate flavor of the fish. The saffron rock shrimp rice beneath the shrimp was creamy and savory, and paired well with the crispy, light fish. Beautiful, bright green chimichurri dressed the fish and plate. I do love that Mélange features several sustainable fish selections. 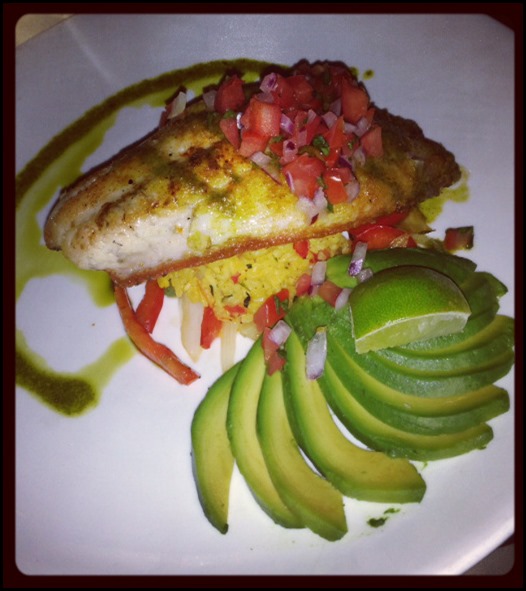 My dining companion ordered one of the day’s specials – a steak served atop creamy, buttery mashed potatoes, surrounded by a vegetable ratatouille seasoned with a sweet heat. We found it to be good, but not stunning enough to justify the price. Shortly after ordering, we were informed that Mélange unfortunately ran out of the polenta that was intended to accompany the steak (which would have been a deal breaker if I ordered this!), and mashed potatoes served as the stand-in. (I could have sworn that we were told there was a gorgonzola element to this dish, but my dining companion denies it. Doesn’t that look like gorgonzola cream sauce on the bottom of the dish!?) 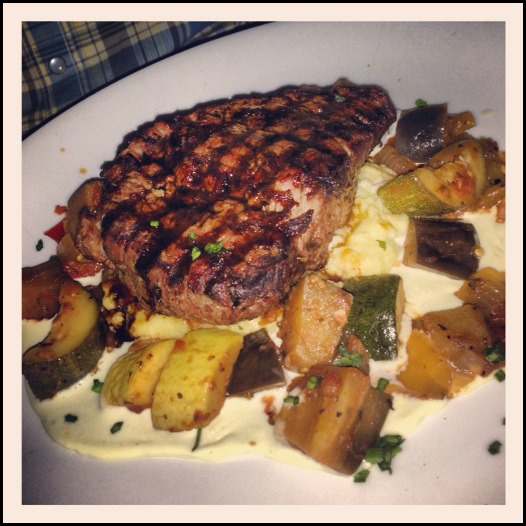 After finishing our main courses, we were presented with a dessert tray featuring trios of mini desserts, such as a trio of fried ice creams, or a trio of parfaits. I asked if we would be able to “make our own” trio, our server said he could see what he could do back in the kitchen, but indicated that he would probably receive a lot of slack for doing so, but still “would be happy to” check. I literally don’t know if he was serious or joking. I mean, I am sure they are asked this daily. Wouldn’t you wonder? I would have been totally fine with a “no, I’m sorry.” But anyways, I guess he made it work, as he brought us our requested trio, but he said not without “getting looks” back in the kitchen. Mmkay. So that kind of made me uncomfortable. Maybe I am too sensitive?

So anyways, the food. Our trio:

Dessert was fine but it didn’t blow me away. I actually prefer bigger desserts but the trio was fun.

And that was our second dinner experience at Mélange. Our our two trips, the first experience was the better. Dinner was very good, but, consistent with the theme of the night: it didn’t blow me away (like last time) and I would have been disappointed in the very steep price tag for the food without the Groupon. Our server wasn’t my favorite and really just made me feel uncomfortable which is kind of the opposite way one should feel while dining out. I might stick their ballertastic happy hours in the future!