On the third day of our vacation, we took a day trip to Dresden, Germany! Now, Dresden wasn’t initially at the top of my list of cities I wanted to visit in Germany (those would be Munich and Berlin!) but Dresden was the most practical German city for us to visit while we stayed in the Czech Republic, since it is only about a three hour drive from Prague.

We enjoyed the scenic drive through the Czech countryside on our way to Germany. Those peaks are [apparently] inactive volcanoes in the background.

Clearly we had a GORGEOUS sunny day for our excursion. 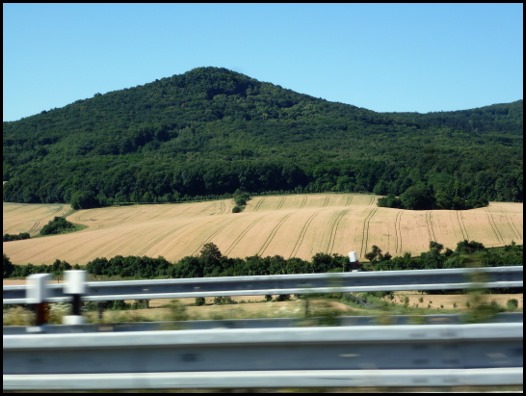 We began our day in Dresden at the world-renowned Zwinger museum. Here is the courtyard of the museum complex: 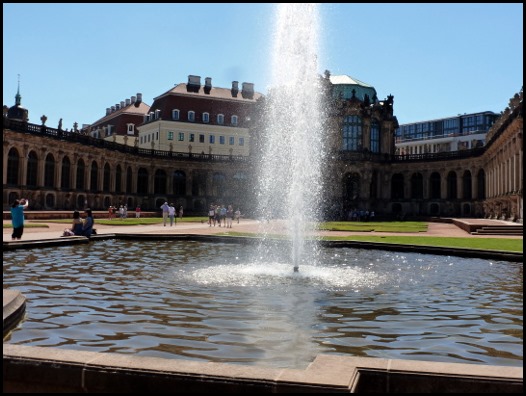 The Zwinger houses an incredible collection of famous art and I loved the time we spent there. We spent most of our time in the Old Masters Gallery, which houses masterpieces from the 15th through 18th centuries.

Perhaps the most well-known piece of art we viewed was Raphael’s Sistine Madonna. Photography not allowed in the museum, but this 500 year masterpiece was featured on our museum tickets. Recognize this?:

After spending time at the Zwinger, we explored Dresden’s city center. It is important to note that 90% of Dresden’s city center was destroyed in World War II, and thousands of lives were tragically lost. The city has since been restored and experienced a resurrection. Many of the structures have been rebuilt as exact replicas of the buildings that once stood in their place, prior to the war.

The Semper Opera House [below] was built in 1841 and destroyed by fire in 1869. Within a decade, the theater was rebuilt, however, again in 1945 the building was destroyed in the war. Forty years later, the opera house was rebuilt once again. [source] 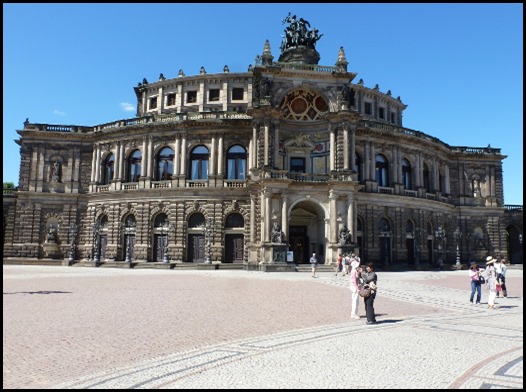 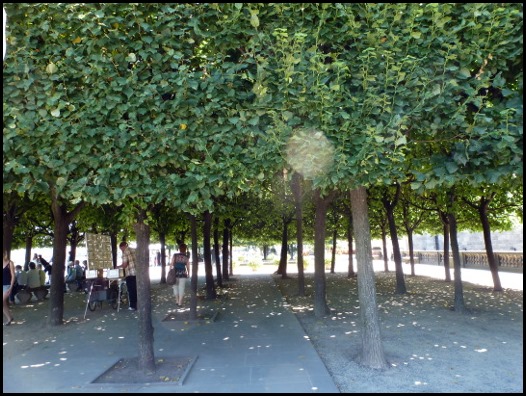 Bridge across the River Elbe:

Built originally in 1743, Hofkirche (Dresden Cathedral), was also destroyed in the Dresden bombings of WWII, and reconstruction didn’t begin for 34 years, until 1979. [source] This beautiful baroque church now stands gloriously in the city center. 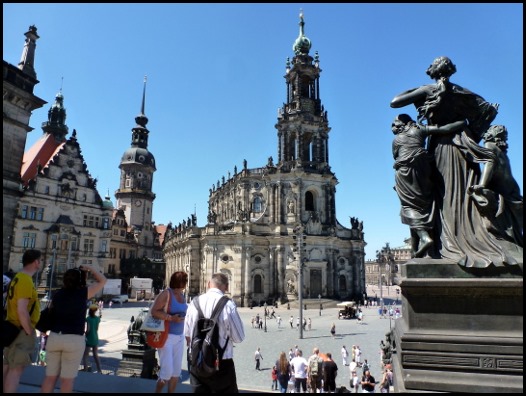 Soon, we were hungry for lunch! We dined at Café Vis-à-Vis in order to enjoy the amazing view of the River Elbe.

Nice view overlooking the river from our shady patio seats:

Iced tea hit the spot on this 85 F degree day!

It pretty toasty outside, and when I saw chilled cucumber soup on the menu, I was sold. This cold, creamy soup was packed with fresh, piquant dill, with a peppery bite. Pink peppercorns are so pretty! I should also mention the bread that accompanied my soup was awesome – especially for dippin’. 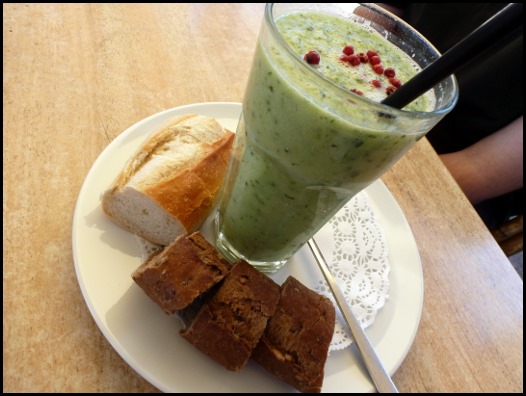 When in Germany, order spätzle. That was my goal. And I did! And OMG, it was SO good! Pillowy dumplings in a creamy, rich, comforting onion and cheese sauce. Carbs for the win. And it came with a lovely salad. I loved this lunch! 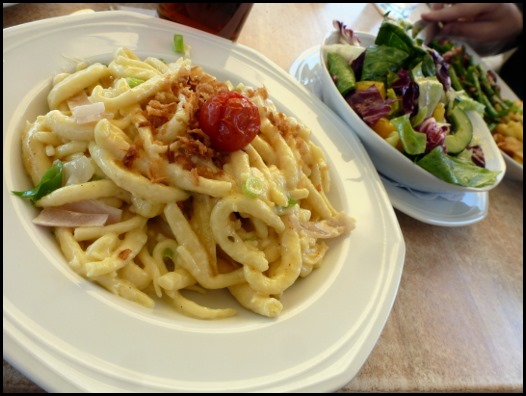 The huz also enjoyed his hearty lunch of pork, potatoes, and green beans. We both had big lunch appetites!

After lunch, we did more strolling and sight-seeing around Dresden’s city center for a few hours. 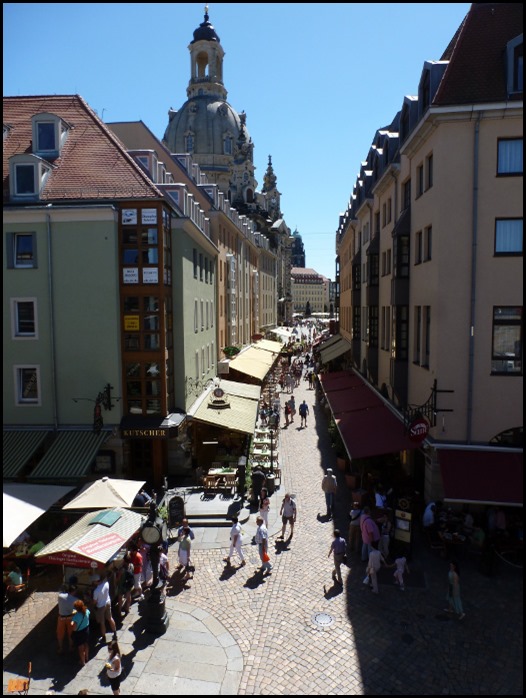 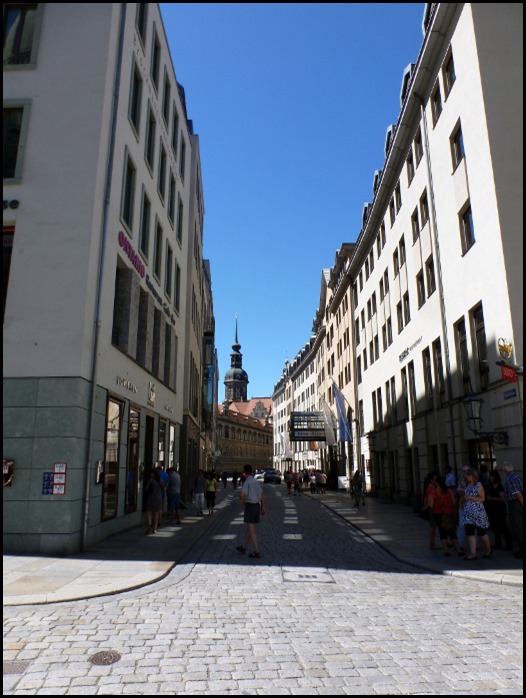 Frauenkirche (Church of Our Lady) can be seen below. Not until 45 years after the war did reconstruction begin on this building, which collapsed after the war. Over 3600 stones from the original structure (the darker ones, as can be seen below) were sorted from the rubble and incorporated into the new structure, which is, again, a replica of the original church. [source]

We watched this guy make giant bubbles in Neumarkt, a city square, for a while.

Procession of Princes, a mural painted in the 1870s, miraculously survived.

Theaterplatz, a city square surrounded by the Zwinger and Semper Opera House. 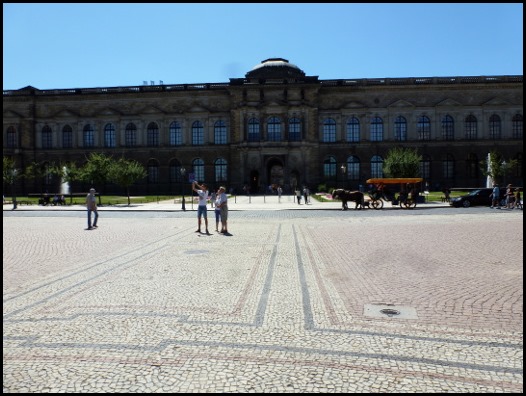 View of Dresden along the River Elbe:

There was a beach on the other side of the river that many people were taking advantage of on this hot day.

Though our time in Dresden, Germany was brief, we had a fun day and I’m really happy we had the opportunity to visit this beautifully restored city that has seen so much history. Also, I possess German ancestry and it was neat to spend time in the ‘motherland,’ albeit somewhat limited. I’d love to see more of the country!

Other posts from this trip:

Chicken Scallopini from @meez.meals! What a fantastic week night meal this was! I whipped this one up in about twenty minutes flat. @Meez.meals makes it SO easy!! If you want in on this, use promo code “MegGoesNom50p” for 50% off your order.
I love #food that is not only #beautiful but also #delicious! Love the Vegan Rainbow Salad @mattyjsbakery! #Avocado, big scoop of #hummus, #pistachios, #pepitas, pom seeds, and so much other #goodness. 🥗
Dumplings for dinner! 💯😋
Get the cheese plate @drinkblom! This meadery in downtown Ann Arbor has not delicious dry meads and ciders and also offers this tasty cheese plate with four excellent Michigan-made cheeses and well as @tastybakerya2 crackers and @thebrinery pickled veggies. Love this place! 💛