Last weekend I had my first Michigan Renaissance Festival experience. Typically, I’ll try almost anything once twice, so when I asked asked to accompany a friend to the festival last weekend, I didn’t turn down the invite. Our intention in attending the event was primarily to people-watch, with our second mission being to eat indulgent food.

If you’re into people-watching, the RenFest is prime territory. Seriously. My eyes saw things that should never exist. Seriously. Boobages pushed up under girls’ chins. Beer bellies hanging out. Mullets with gnarly three-inch roots. Shudder. #scarredforlife

In terms of food, we did well. Mission #1: obtain turkey drumstick. We waited through the long lines and got a pair of these baseball bat-sized turkey legs. Okay, I exaggerate… maybe not baseball bat-sized but they were huge! I could barely make a dent. I would have taken pictures of us eating these drumsticks like barbarians, but my hands were occupied and totes messy at the time. 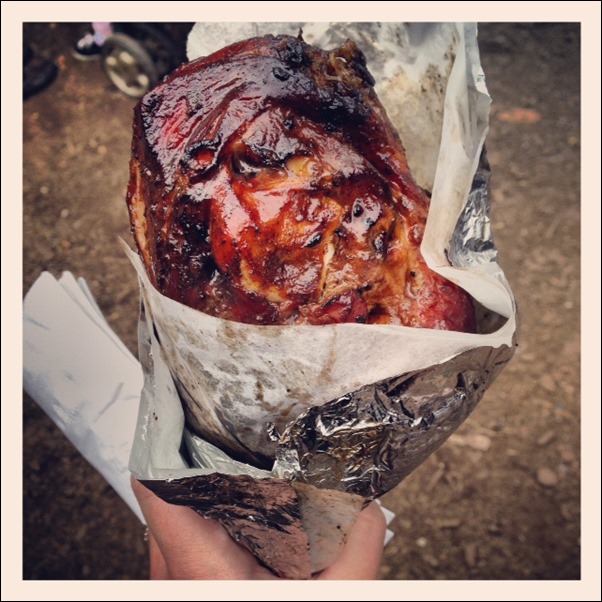 And then, of second importance was the obtaining of the Soup in a Breadbowl. Seriously, every fool in this place (that includes me, natch) was walking around with a flipping breadbowl full of soup. I had to get one for myself.

RenFest was most certainly an… interesting experience. I’m glad I had a chance to check it out. We both agreed it might be a once-every-five-years kind of thing, in that we might consider returning again in a few years to do more people-watching and see how the festival-goers have evolved over time.

Have you ever been the RenFest? What is your favorite food at the festival?

One thought on “Photo of the Week–RenFest Food”