Have I mentioned how much I love Ann Arbor lately? Well, in case not: I do!

…on Friday evening with the huz, we came up with plans to take ourselves on our own “50-50 Mini Foodie Tour of Kerrytown” the next day.

Now you’re probably thinking, Megan, what on God’s Green Earth are you talking about, right now, am I right?

Let me explain. There are a couple dishes in Kerrytown that we’ve been talking about trying for ages, but somehow never have gotten around to it. (And as a result, we feel like inadequate Ann Arborites.) The “50-50”, inspired by my 50-50 Burger (which is half beef and half bacon, by the way), meant that we would go halfsies on two different dishes at two different places. “Mini” is pretty self-explanatory, in that the tour was short. “Kerrytown” was our destination.

Our first stop was Zingerman’s Deli, which is just one element (albeit the most popular) of the well-known Ann Arbor Zingerman’s food dynasty.

We both have a handful of experiences of with Zingerman’s food, but we’ve never visited together and had a proper dine-in experience at the Deli. Likewise, we both had never tried what is perhaps Zingerman’s most well-known sandwich, their #2 Reuben (also President Obama’s favorite.)

On Saturday, we remedied that! At $16.50/sandwich, Zingerman’s Reuben doesn’t come cheap, but here it is all about the high quality ingredients.

So did it live up to the hype? Why yes, I do believe it did. It took a lot of self-restraint to avoid inhaling my sandwich half in 30 seconds flat. I tried to slowly savor each bite, but dang, this delight brought a whole new meaning to words “Reuben sandwich,” for me.

Now that my salivary juices were properly flowing, it was time to head to our second stop: Monahan’s Seafood Market. 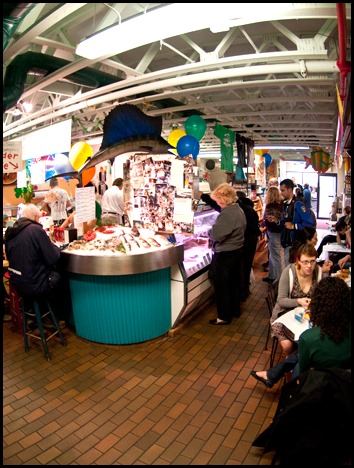 Monahan’s is a bustling seafood market that has been in business for over 35 years in Ann Arbor’s Kerrytown and features a large and varied selection of fresh seafood daily.

While the market is open for retail until 7pm on weeknights (and until 5pm on the weekend), if you stop by between 11am and 3pm Monday-Saturday, you can also grab lunch!

For us, that meant sharing a plate of Monahan’s well-known Fish and Chips: 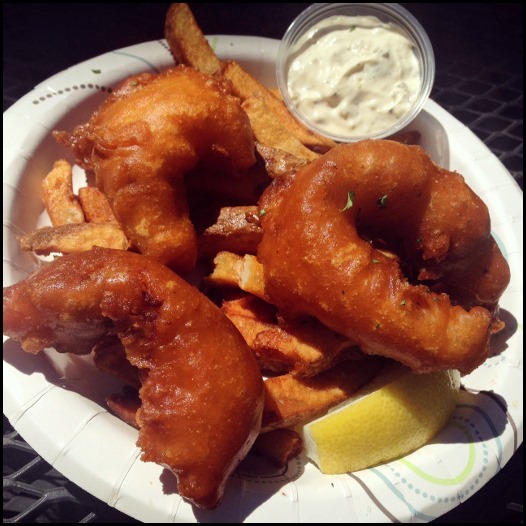 Can you see that batter? Perfectly golden and crispy, not overly greasy – served piping hot, fresh out of the fryer. And the pollack within was as tender and flaky as could be. All I have to say is that this is the best fried fish I’ve had to date.

And the tartar sauce? Also phenomenal. I would drink it by the shot glass.

I hear you can also have anything you see in their cases cooked to order as well.

You won’t find tons of open seating inside, especially on a busy Farmer’s Market Saturday, but we found a sunny table outside in the adjacent courtyard, where we enjoyed both the fresh air and fried fish. Awesome.

To wash everything down, we stopped into Sweetwaters for a pair of Thai Iced Teas, one of my favorite guilty pleasures. 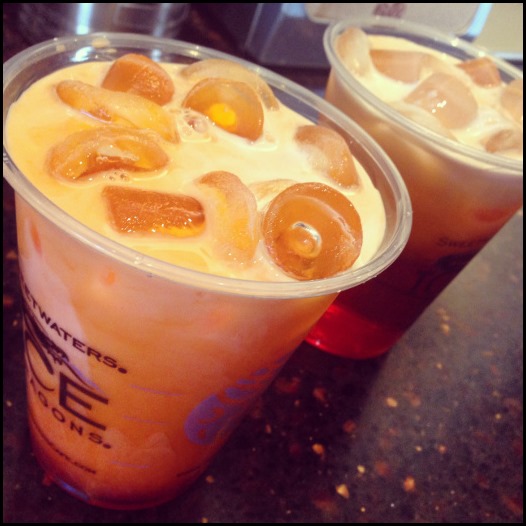 Kerrytown is such fun and quirky area to explore. Between the Farmer’s Market, the eccentric shops, and fantastic culinary destinations, you won’t be disappointed.