In my last post, I told you about our dinner at Ann Arbor’s newest Thai eatery, Katoi. In this post, I’ll tell you about what else you can find in this former Jerusalem Garden space on South Fifth Avenue.

In the handful of square feet existing in the entrance to Ann Arbor Thai pop-up restaurant Katoi resides Bon Bon Bon’s sweets counter. (Well, apparently Katoi is here to stay, and no longer a pop-up. Can anyone confirm this is true?)

The confectioners of Bon Bon Bon have partnered with Katoi to bring their hugely popular chocolate treats from Detroit to Ann Arbor. 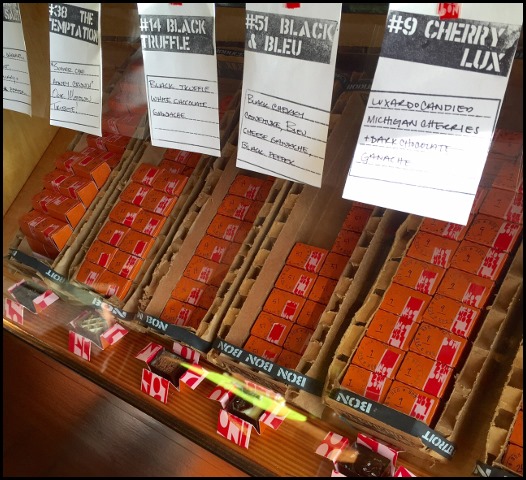 Recently featured in Food & Wine, Bon Bon Bon’s candies have exploded exponentially onto the Metro Detroit food scene over the last year. I actually listened to a pretty interesting interview with Bon Bon Bon owner/chocolatier Alexandra Clark on 107.1 FM recently and knew I had to try their chocolates soon.

The Bon Bon Bons don’t come cheap, but they do come individually hand-packaged with love, and you can purchase as few or as many as you’d like.

It’s pretty fun browsing all of their different flavors listed on their website. A few fun ones I found:

A box of these would make such a fun gift!